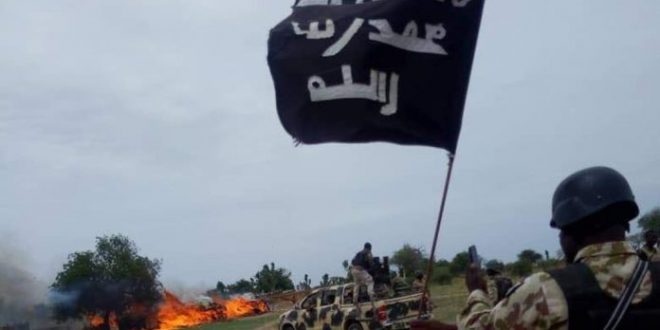 Suspected fighters of the Islamic State in West African Province (ISWAP) have killed two policemen and a soldier at Malam Fatori, headquarters of Abadam Local Government Area of Borno State.

Security sources confirmed this to Daily Trust, saying the deceased were members of a joint security team conducting clearance operations in the area in preparation for the return and resettlement of Displaced Persons (IDPs).

The Borno State government is currently planning to shut down IDP camps.

A security source said the troops who were deployed for the operation came under attack and responded swiftly but “unfortunately we lost three gallant men”.

“They came with several gun trucks and motorcycles and attack the joint security team.”

“Unfortunately, we lost two mobile policemen and one soldier during the gun battle with the ISWAP fighters.

“The ISWAP came with several trucks mounted with Anti Aircraft guns and motorcycles. The combined efforts of the policemen, soldiers, operatives of civil defence, intelligence services as CJTF swiftly engaged and repelled the attack.”

ISWAP has renewed its offensive in the North East since the killing of Abubakar Shekau, Boko Haram leader, and Musab Al Barnawi, its leader.

Daily Trust had reported how the insurgents raided a hospital in Borno and set a telecommunication mast ablaze.

Recently, the notorious group released footage of how one of its fighters executed captured soldiers.