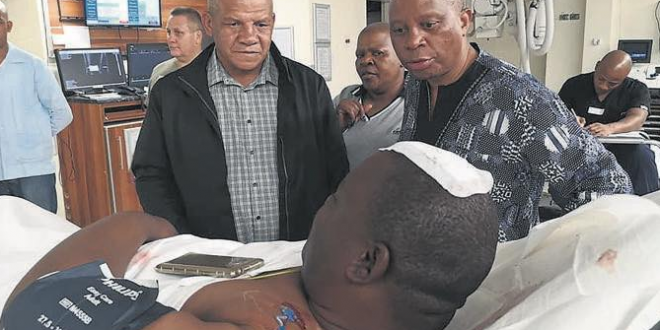 Policeman Miraculously Survives After Being Shot Eight Times By Robbers

A policeman miraculously survived after he was shot multiple times by armed robbers. The officer was shot eight times as his female partner returned fire, wounding one of the suspects, who later died in hospital.

According to reports, on Saturday night, gunshots rang out on the M1 in Johannesburg, South Africa, as two Metro cops were attacked by armed criminals.

JMPD spokesman Wayne Minnaar said the dead suspect and two accomplices had attempted to rob the male officer of his service pistol while he and his colleague were setting up a speed camera. This was on the M1 north at the Marlboro on-ramp, near Sandton.

“The suspect shot the male officer in the arm and both legs. The woman returned fire, shooting the suspect multiple times.

“Both officers were taken to Milpark Hospital and the suspect was taken to Thembisa Hospital, where he died,” said Minnaar.

He said that an illegal firearm was found at the crime scene.

The injured officer is in a serious but stable condition.

Previous Outrage In Anambra As Man Buries Wooden Image In Place Of Brother’s Corpse (Video)
Next Metele Massacre: We Ran Out Of Ammunition, I Pulled My Uniform And Ran – Soldier