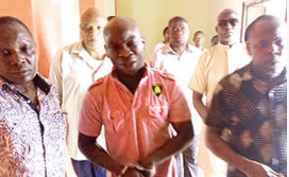 Okoroeze was also arraigned before a chief magistrate’s court on two counts of obstruction of justice and conspiracy. No bail was granted to him, he remains in police custody for the alleged offences.

Chief Magistrate, Sokari Andrew-Jaja, cautioned the dismissed Sergeant as he cried uncontrollably inside the court.

The prime suspect, Ifeanyi Dike raped, killed and removed the organs of 8 year old Victory Nmezuwuba, before he was arrested and taken to the SCIID.

Okoroeze, who was the Investigating Police Officer, said he temporarily removed Dike’s handcuffs while he took his statement, but that Dike escaped from his custody in the covers of the dark.

The victim’s father, Dr Ernest Nmezuwuba, who was also in the charge room while Dike was supposed to write his statement said there was no power supply in the area at that time and that he had to rely on candlelight during that time.

The suspect, Dike, reportedly escaped from Okoroeze’s custody and his whereabouts has still remained unknown.

The state Commissioner of Police, Mr. Ahmed Zaki, ordered the dismissal and arraignment of Okoroeze for criminal conspiracy.

When Okoroeze was aaraigned and presented to the magistrate’s court in handcuffs, he cried profusely..

“What have I done to myself? What did I do? Call my wife for me”.

“That you, Johnbosco Okoroeze, on August 19, 2017, at about 8.30pm at the State Criminal Investigation and Intelligence Department, Port Harcourt, in the Port Harcourt Magisterial District, did assist one Ifeanyi Dike, who is to your knowledge guilty of the offence of murder of one Chikamso Nmezuwuba, aged eight years, for rituals, to escape when he was to be detained for prosecution, thereby committing an offence punishable under Section 322 of the Criminal Code Cap 37, Vol. II, Laws of Rivers State of Nigeria, 1999.

“That you, Johnbosco Okoroeze, on the same date, time and place in the aforesaid magisterial district, did conspire with a suspect, Ifeanyi Dike, and allowed him to escape from prosecution to prevent and defeat the course of justice, thereby committing an offence punishable under Section 126 (1) of the Criminal Code Cap 37, Vol. II, Laws of Rivers State of Nigeria 1999.”

The chief magistrate remanded Okoroeze in jail, and adjourned the matter till September 14, 2017 for adoption of written addresses.