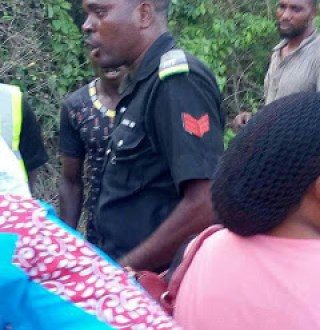 At the initial stage of the incident, the Commandant had approached Sargent Oluwole in a peaceful manner, that he should please release the uniform of his officer while Oluwole was claiming that it was illegal for the officer to have used the uniform when the Peace Corps was not approved yet.

The Commandant however made him understand that for the fact that the bill is still waiting for government approval, that does not stop his men from using their uniform because the organisation is known with the uniform right from the world grow.

The act of hatred created to Nigeria Peace Corps Bill by the officers and men of Nigerian Police Force has led Sargent Oluwole Oke to addressed the No.01 officer of Peace Corps in the state as a Stupid man…..

Writer, Investigative Journalist, and Social Media Strategist
Previous Graphic: For Refusing To Fetch Water, Girl Gets Brutalized With Razor Blade By Her Cousin
Next See What Nigerian Soldiers Were Spotted Cooking While At The Battlefield(Photos)