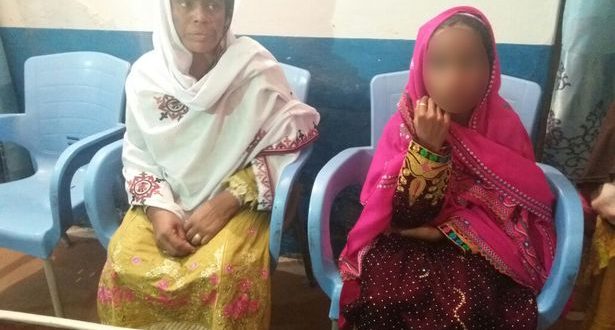 A 10-year-old child bride who was sold to a 50-year-old man by her mother to pay off a £3,400 loan, has been rescued by the police in Pakistan.
Jeetmal Mehar offered £5,400 to Pathani Mangrio’s parents to marry her. Pakistani Officers raided the marriage broker’s house just before the contract was signed and arrested 11 people complicit in the deal but the groom escaped.

Gulzar Mari, a policeman investigating the case, said: ‘On December 19, around 11am we received information that a minor girl was being married to a 50-year-old man.

We took immediate action and raided the house of Muhammad Mehar. He was the broker in this marriage and had taken £340 from the groom and £170 from bride’s family.’

The bride’s mother Masmat Nabiat said that she had agreed to marry her daughter off as the family had to pay a loan of around £3,400. Qazi Haji Solangi, who performed the marriage said: ‘I was approached by Muhammad Mehar for reciting Nikah.

I didn’t know the girl is only 10 years old as I didn’t ask for age of bride and groom. I just asked the names of the bride, groom and their parents name and recited Nikah.’

Police in Sindh province have registered a case under Sindh Child Marriages Restraint Act and produced all the arrested people before a court on Wednesday. The court has ordered the bride to be sent with her maternal grandfather and the others to jail until investigation is completed.

Previous El-rufai: “Atiku Didn’t Spend A Dime On Buhari’s 2015 Campaign”
Next Photos: IG Of Police,Meets With SARS Commanders, To Begin The Reform Of The Unit