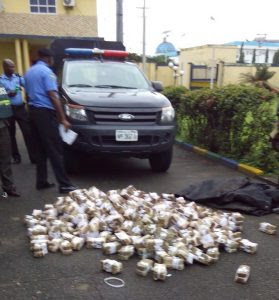 Police recovers N60.25m out of N100m stolen by Bullion van Driver in Port-Harcourt

The Police in Rivers State has recovered N60.25m out of the N100m stolen by a bullion van driver. The bullion van containing the cash was reported missing last week Friday after arriving  Port Harcourt from Aba to deliver cash to Zenith Bank and Stanbic IBTC Bank.

According to the Rivers State Deputy Police Commissioner in charge of Administration, Mr. Uche Anozia, the unnamed driver made away with the cash when security escorts attached to the van disembarked after part of the cash was delivered at Zenith Bank.

His words, “On the 8th of July, last Friday, we received a report by one Mr. Stanley Ndubuisi of Bankers Warehouse, a company located at 36, Forces Avenue, Old GRA, Port Harcourt.

“The company engages in bullion van services. These bullion vans are rented by banks to convey their cash to and fro. So, on this day, a bullion van was rented from this company by Zenith Bank and Stanbic IBTC Bank, here in Port Harcourt.

“When it (bullion van) arrived Port Harcourt, it went to Zenith Bank and delivered part of the money owned by the bank to it. According to the complainant, at that point the soldiers disembarked and left.

“Now, it remained the money for Stanbic ibtc Bank and the driver alone. Consequently, the driver absconded with the money.”

On Monday, three days after the incident was reported to the police, the Rivers State Police Command recovered N60.25m of the stolen amount based on a tip off.

Anozia said, “Useful intelligence was received by me in my office on July 11 that a certain Ford Explorer was found parked on the premises of a supermarket, Everyday Supermarket, located in the GRA and that the vehicle contains sacks suspected to be bank property.

“I immediately dispatched my DC operations to the area to verify and validate the information. Fortunately for us, it was discovered that the sacks in the vehicle belong to Stanbic IBTC Bank because of the seals on them.

“The amount recovered, according to information, after check is N60, 250, 000. The driver that parked the car at that spot was the driver of Everyday Supermarket. He is on the run now.”