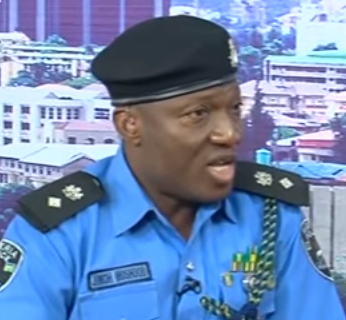 There was a heated argument on Channels TV this morning when the public relations officer of the Nigeria Police Force, Jimoh Ibrahim refereed to Benue state governor, Samuel Ortom, as a drowning man.

Moshood had engaged the Chief Press Secretary to the Governor, Mr. Terver Akase, in a heated argument over the series of violence that have left many to their early graves since the beginning of the year.

Both officials had featured as guests on Channels Television’s Sunrise Daily.

“And that is why we felt you don’t join issues with a drowning man,” he said in an apparent reference to the governor calling for the immediate resignation or sack of the IGP.

Things, however, did not seem to go down well with the CPS who interrupted him with a strong rebuttal, demanding a retraction of the statement.

At this point Mr Akase interrupts him, making it clear that he took exception to the statement, insisting that “the governor of Benue State is not a drowning man.”

“He has to withdraw that statement. The governor of Benue was popularly elected and he is not a drowning man,” the CPS added.

The State Government and the police authorities seem not to be on the same page on the recent killings that have also displaced many of its indigenes.

While the police seem to have credited itself to having restored peace in the troubled state, the state, on the contrary, is calling for the immediate sack or resignation of the Inspector General of Police, Mr. Ibrahim Idris.

To the police spokesman, the call made by the state government seems not to have gone down well as he considered it an affront to the police boss and the entire police officers.

He added, “It is a great disservice to the Inspector General of Police and the entire Nigeria Police Force for the governor to call for his resignation, the governor should resign first.

“What he has said, the document presented to the Senate is for action by the Senate. And nobody can make any part or complete document public until the Senate makes a decision on it and passes a resolution.”

But defending his principal, Akase wondered why the IGP should not resign when the police under his leadership had failed to secure lives and properties as enshrined in the Police Act.

Section 4 of the Police Act, he explained, is the duty of the police to protect lives and maintain law and order.

The governor’s spokesman, however, regretted a situation whereby the police would seek clearance from the authorities in Abuja before taken any decisive action.