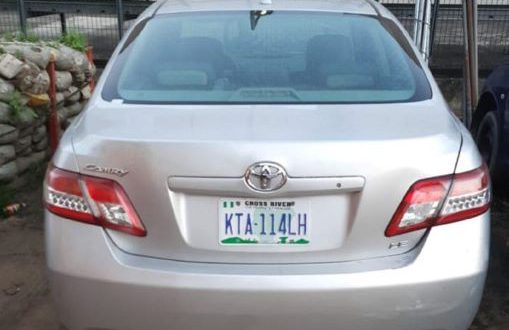 The Cross River State Police Command has arrested a middle-aged man, Godswill Ezekiel Ugbe for allegedly attempting to sell his employer’s car for a paltry 350,000 naira in Calabar.

The suspect, who was arrested by the Anti Kidnapping and Cultism Squad AKCS, while driving the car to the potential buyer’s place was intercepted around Akpabuyo LGA.

Investigations revealed that the suspect, Godswill Ugbe was employed as a  security guard by a man who lives abroad to watch over his properties including the building and two cars.

He moved the car from the compound without the knowledge of the owner with the plan to sell it for 350,000 naira before he was arrested.

When contacted Tuesday, Police Public Relations Officer in the state, DSP Irene Ugbo, confirmed the arrest adding that the suspect will soon be charged to court.

“He is a gateman employed to safeguard a compound and some cars since the owner and his employer lives abroad, but he decided to try selling off one of the cars.

“Unfortunately for him, men of the Anti Kidnapping and Cultism Squad, AKCS, on patrol suspected that the car was stolen and went after him, after his arrest they discovered he was trying to sell the car for a meagre N350,000, that car is about 3 million naira.

“He has confessed to the crime and would be charged to court as soon as possible,” she said.