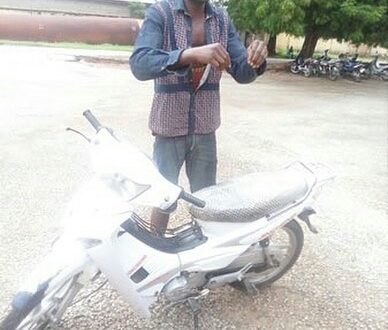 Police Forced Me To Admit To Crime – Robbery Suspect

A man who was arrested by the police in Niger State for alleged robbery, has denied the crime, saying he was being coerced by the police to make a confessional statement.

25-year-old Kingsley Ibe was arrested by the police Special Anti-Robbery Squad on the allegation that he connived with other hoodlums to rob one Yusuf Isah of Gauraka, Sabo-Wuse council.

But Ibe vehemently denied being a robber, saying he would rather die than admit to a crime he did not commit, insisting that the police knew the real culprits but refused to go after them.

Punchng quoted him as saying: “I don’t know why police are keeping me here. I am not an armed robber and they cannot force me to be one. It is better I die for the offence I committed than to die for what I know nothing about.

I am not a thief and cannot admit to what I knew nothing about. The motorcycle they accused me of stealing was not stolen by me, the police knew where it was coming from.”

He revealed that it was because he had no one to speak for him that the police were plotting to implicate him. But the police spokesperson in the state, Comfort Olawumi, said the suspect was sighted by the complainant’s sibling, Usman Ithado, with the stolen motorcycle, adding that he was given a chase before he was apprehended by police operatives.

She added that the police recovered the motorcycle from the suspect, noting that he would be charged to court as soon as investigations were concluded.