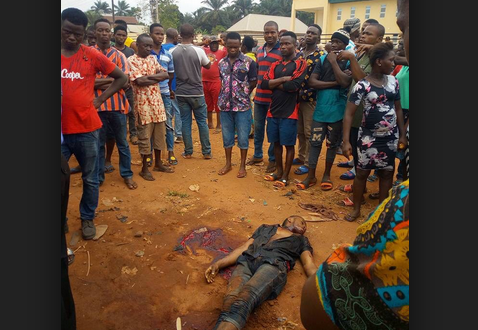 The incident, which happened around 5am at a T-junction adjacent to the Okwelle Police Divisional Headquarters in the Onuimo Local Government Area of the state, made the youths to take the law into their own hands.

Recall that trouble started when the Police sergeant and the deceased had an altercation.

Itam and three of his colleagues who were on a stop-and-search duty on the expressway in the early hours of that day had asked the tipper driver with registration number AAH 229 XA and other vehicles, including trucks, to clear off the road.

After sometime, the suspect asked other vehicles to go, leaving only the tipper which the deceased and his driver, Ifeanyi Nwankwo, were in.

The problem degenerated when the conductor approached the sergeant to ask why he was still keeping them.

Itam, who was holding an AK-47 rifle, was said to have shot the 20-year-old three times on his neck at  close range, and fled the scene almost immediately Okafor died.

Embittered by the death of the boy, the youths of the area regrouped and attacked Okwelle Police Divisional headquarters.

They set the Police division ablaze after breaking the perimeter fence at the back, but the fire was quenched before it could do much damage.

Confirming his dismissal on Monday, the state commissioner of Police, Chris Ezike, said Itam would be arraigned soon.

Ezike said Itam and other Police officers who were on duty during the incident were tried at the Police orderly room in Owerri over the death of the 20-year-old.

The CP informed that the ex sergeant was guilty of unprofessional conduct during the incident and was therefore expelled from the Force.

“I can confirm that Sergeant Abu Itam has been dismissed from the Nigeria Police Force. The Police orderly room trial found him guilty of unprofessional conduct.

“He is in our custody and would soon be arraigned. Other officers who were on duty but were not part of the murder were also tried. They would be punished as well. They are likely to get demoted,” Ezike said.

Previous Catholic Priest Steals £426,000 Church Donation, Funeral Fees In Brasil
Next Meet The Nigerian Senator Who Does Nothing But Sleep In The Red Chambers