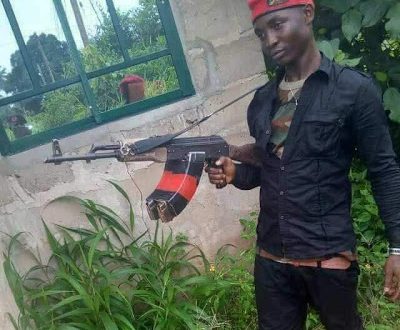 The Rivers State Police Command has confirmed the death of Don Waney’s younger brother and a notorious member of his gang.

Oluchi Igwedibia alias Obatosu, was gunned down by operatives of the Department of State Service (DSS) on Saturday, at Sabo Iyakpe, Etsako West in Edo State.

Addressing newsmen on behalf of DSS, the State Commissioner of Police, Zaki Ahmed, confirmed the death of Obatosu, when the corpse was displayed at the headquarters of 6 Division, Nigerian Army, Port Harcourt.

Ahmed warned cultists to shun cultism and accept peace, stating that any youth who involves himself in crime would be dealt with by the law.

“This is, in deed, the fruit of collaborative effort by the security agencies to get the State free of crime and cultism. No evil doer will go free. Every youth should shun crime and embrace peace

“Oluchi Igwedibia was caught up by law in Auchi, Edo State, where he ran to and was planning to come back and attack his local government before he was killed… The law caught up with him,” Ahmed said.

Obatosu, who was amongst the 32 cultists declared wanted by the State Security Council, met his end following accurate DSS intelligence that tracked him down to Edo State.

The late Obatosu was said to have played a prominent role in the New Year killings by Waney’s gang in Omoku and its environs.

His death came barely a week after he allegedly wrote a threatening letter to Ogba/Egbema/Ndoni Local Government Area (ONELGA) threatening to launch a reprisal attack in revenge over the death of his murderous brother.