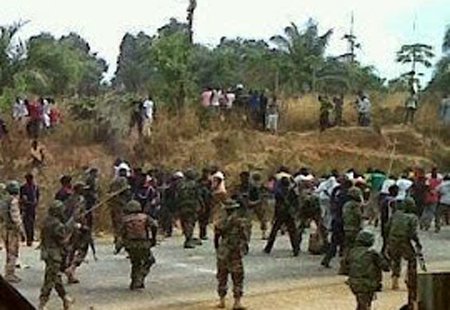 The Police Command in Borno on Thursday confirmed the killing of 13 persons after Wednesdays multiple attack in Maiduguri. Mr Damian Chukwu, the Commissioner of Police disclosed this at a news conference on the attack.

“They were sporadically firing Anti Aircraft guns into and across Jiddari Polo near the Federal High Court.” Chukwu said the attackers set ablaze some houses in the village. “They set fire on some houses and makeshift tents in the neighborhood.

“However, the police, comprising the Special Anti Robbery Squad (FSARS) and others were swiftly deployed to the scene to engage the attackers.’’ Chukwu said that the military mobilised and repelled the attack.

He added that “the military massively mobilised and repelled the attack in a gun duel that lasted for about an hour.

“The command invited the fire service who promptly put off the fire on the burning houses.”

The commissioner said some residents who fled their homes during the gun duel later returned in less than two hours after the attack. He explained that one suspected Boko Haram terrorist was captured and was now in custody of the Nigerian Army, while three others, including a suicide bomber were killed in action by the military.

He said “unexploded vest on the dead suicide bomber was recovered and rendered safe by the police team.’’ He said three AK 47 rifles, some bombs and hand grenades were recovered from the insurgents. The commissioner said a civilian yet to be identified was killed in the stampede, while a soldier was reported wounded in action. Chukwu also said that normalcy had returned and residents were going about their normal activities.

According to him, the first explosion occurred in a Mosque at Goni Kachallari village in Jere Local Government Area at the outskirt of Maiduguri, when Muslims were coming out from the Mosque. “The suicide bomber and six others died, while 18 persons were injured.

“Police EOD team was promptly dispatched to the scene to sanitize and render the area safe,’’ he said. Chukwu said 13 persons, including three suicide bombers died in the explosion, while 18 civilians were injured.