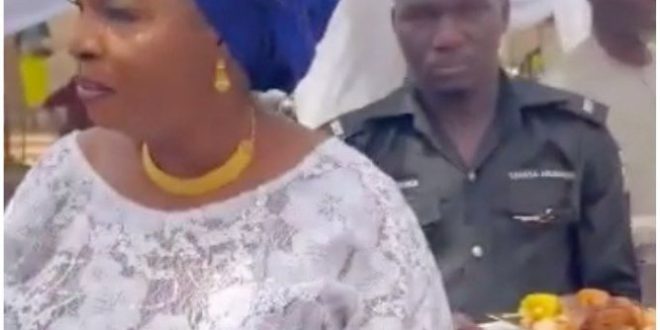 A screenshot of the viral video

The Nigeria Police Force Headquarters on Wednesday warned its operatives attached to Very Important Persons all over the country to stop serving purposes other than protecting prominent individuals from security threats.

The police authorities in Abuja also said it was probing the viral video showing a policeman carrying the food tray of a VIP at an event in Kwara State.

Acting Force Public Relations Officer, Muyiwa Adejobi, in a chat with The Punch on Wednesday, said the unnamed police officer had been identified and summoned to Abuja.

Adejobi said, “He (the policeman) has been identified. He is coming to Abuja to meet us. We’ll ask questions from him and take necessary action. We need to discourage such a thing because it is embarrassing the image of the Force and we can’t continue to be experiencing that kind of a thing because it is highly unprofessional.”

The acting FPRO, however, did not reveal the name of the officer and the identity of the VIP.

In the viral video, the policeman attached to the female VIP based in Kwara was seen meticulously carrying a tray crowded with food behind the “big madam” at a society function.

Many Nigerians have been outraged by the act, noting that the presence of the police officer and the “maid” duties he assumed at the party with the VIP defeated the purpose of attaching orderlies to prominent persons.

With the worsening security challenges ubiquitous in different parts of the country of late, many security experts have canvassed that police officers attached to VIPs be withdrawn and deployed in hotspots to complement the shrinking 300,000 police officers nationwide but the police authorities have defiantly refused to act.

Over the years, successive Inspector-General of Police had ordered the withdrawal of police officers attached to VIPs scattered across the country but the directive had only existed on paper as policemen have been seen carrying bags of VIPs, opening the doors of their cars with matching salutes.

The incident happened at Daniel’s Asoludero residence at Sagamu in Ogun, even as cops expressed sadness that Ogunsola, an orderly, was turned to a gatekeeper at the house.

Charles Igbinidu is a Public Relations practitioner in Lagos, Nigeria
@https://twitter.com/ionigeria
Previous Israel’s Holocaust museum is so dependent on Chelsea owner Roman Abramovich that it wants to protect him from sanctions
Next Russian Defense Ministry Spokesman admits nearly 500 of its troops have been killed and 1,600 more injured since invasion of Ukraine