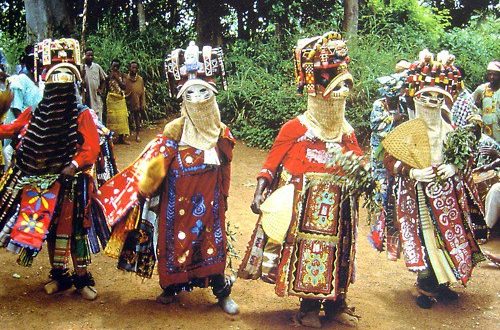 The Anambra Police Command says it has arrested three masqueraders for allegedly disrupting a church programme on Friday night at Uke, Idemili North Local Government Area of the state

The Police Public Relations Officer in the state, Nkeiruka Nwode, told journalists on Saturday in Awka that the suspects attacked worshipers at the Holy Ghost Adoration Ministry, Uke.

“Three masqueraders have been arrested in connection with the church attack. We have commenced investigation into the cause of the incident and would notify you when concluded,” Nwode said.

The News Agency of Nigeria gathered that the masqueraders were celebrating a festival known as “Uzo Iyi” festival.

Mr Nwode, however, denied that the masqueraders attacked the police officers from Special Anti Robbery Squad, who responded to calls on the breach of peace.

NAN further gathered that about 10 masqueraders invaded the church, assaulted the worshipers and attempted to whisk away the spiritual director of the centre, Emmanuel Obinna, but for the quick response of the police.

A witness said the leadership of the church called the Special Anti-Robbery Squad of the police to help their internal security to protect worshippers.

“On arrival, the operatives arrested three masqueraders, who were involved in the attack, but their colleagues attempted to stop them from taking the arrested masqueraders away, prompting SARS operatives to shoot sporadically into the air before taking them away,” the source said

The Personal Assistant to the spiritual director of the centre, Francis Okoye, told journalists that a Catholic priest, Henry Nnajiofor, a seminarian and 28 others were injured during the attack on the worshipers.

“The normal masquerade activities in Uke, to the best of my knowledge, ends by 6 p.m. but as at 8 p.m. on Friday, the masqueraders were still parading at the entrance route of Uke Adoration ground, extorting money from our members and robbing others in the guise of masquerade festival.

“As at 8.30 p.m., we started receiving information that some masqueraders were attacking our members, flogging them and inflicting injuries.

“They flogged some of them, stabbed some with their weapons including machetes, while others were robbed of their mobile phones and other valuables.

“We quickly contacted the SARS office to assist our Adoration security team, who could not handle the situation at that point in time.

“When SARS arrived an hour later, they arrested two masqueraders but on their way back, the youths blocked the road and insisted that the masqueraders must be released; that was when SARS officials fired shots in the air to disperse them.

“When SARS left, they re-grouped and this time came in their numbers to the Adoration premises, beating everybody including the elderly, the sick and pregnant women.

“Our Adoration youths, in defence, pursued them and arrested one other masquerader, who stayed in the Adoration ground with us until this morning when we handed him over to the officials of the Nigerian Army, who came to our rescue.”