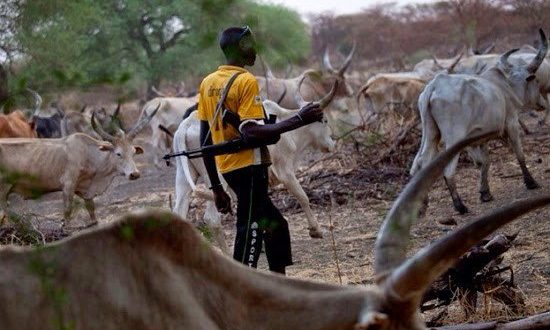 The Police Command in Ogun on Wednesday arrested a suspected herdsman, identified as Mohammed, allegedly with AK 47 riffle.

The Command’s Public Relation Officer (PPRO), DSP Abimbola Oyeyemi, confirmed in a statement in Ota, Ogun State, that the suspect was arrested around Iwoye Ketu in Imeko Afon Local Government Area of the state.

Oyeyemi said that the operatives of the state police command on Tuesday apprehended the suspect following intelligence information.

“Upon the information, the DPO quickly mobilised his men, other stakeholders like the hunters, vigilante men, civil defence corps and stormed the said forest.

“After hours of combing the forest, one of the Fulanis, who identified himself as Mohammed, was seen hiding in the bush with one AK 47 riffle, and he was promptly arrested,” he said.

The PPRO said the arrested armed boy was strongly suspected to be a member of kidnap syndicates that had been terrorising the area for quite some time now.

Meanwhile, the Commissioner of Police, Mr. Edward Ajogun, had ordered the immediate transfer of the suspect to the State Criminal Investigation and Intelligence Department for discreet investigation.

He also directed that the entire forest be properly combed with the view to apprehending other members of his gang. (NAN).

Charles Igbinidu is a Public Relations practitioner in Lagos, Nigeria
@https://twitter.com/ionigeria
Previous  kidnappers of  Niger State Information commissioner demand for N500m ransom
Next Kim Kardashian Says Kanye West Is the One Who Helped Her to Be More Confident In Herself