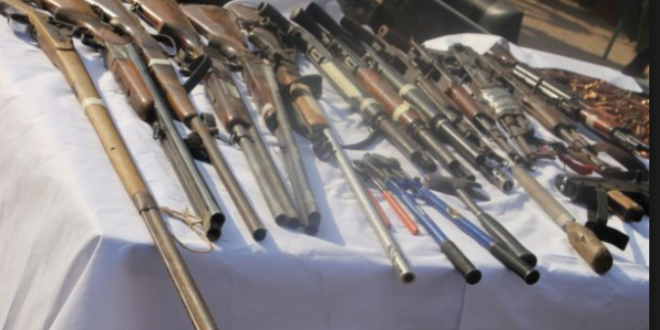 The Police Command in Edo said it had recovered 120 arms and ammunition in compliance with the Inspector-General of Police’s directive on Arms mop-up nationwide.

The Commissioner of Police in the state, Mr Johnson Kokumo, disclosed this on Wednesday while briefing newsmen in Benin.

He also disclosed that 154 live cartridges were mopped up with five suspects arrested during the month-long operation.

In another development, the command had arrested three suspected members of a kidnap gang.

According to the commissioner, the gang has threatened to kidnap a man  identified as Reuben if he refused to pay N1 million into a Zenith bank account.

Kokumo also disclosed that another suspect was arrested by the command for conspiring with others still at large to rob one Jackson Okuomoise.

He said that the suspected robbers also abducted the victim’s friend and shot him.

The commissioner thanked the people of the state for volunteering credible information, and assured of the command’s worthy stewardship and efforts to ensure peaceful Easter celebrations.