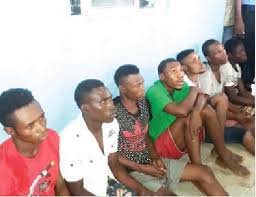 The police in Bayelsa State nabbed suspected members of cult groups, who invaded Peremabiri Divisional Headquarters to release one of their members, Prince Ayibalaifa, who was detained for indecent assault.

He said they admitted to being members of the Greenlanders’ cult, except Douye Koufe, who claimed to belong to Icelanders. Amba said investigation was on, adding that the suspects will be prosecuted.

He lamented the attack and said the police, with the assistance of the government was able to bring back civil authority in the area. Amba said: ’’They actually rescued Prince Ayibalaifa and escaped, but they were re-arrested.