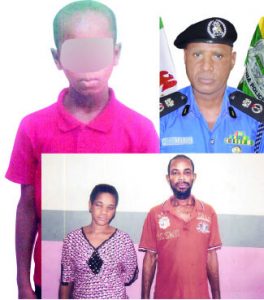 Police Arrest Couple Who Sold Their Three Children Including Three-Day-Old Baby For N150,000

The Akwa Ibom State Police Command have arrested Magnus Nsikak, 40, and his wife Ruth for selling their three children for N50,000 each.

Nsikak and his wife allegedly conspired and sold their three sons, three-day-old Samuel, five-year-old Ubong and 10-year-old Ekpo to a trafficker in Aba, Abia State, through a nurse in Ikot-Abaji Local Government Area of the state.

Ruth, however, denied being part of the transaction, claiming that she was actually deceived by her husband into believing that their children were being cared for by a member of their extended family in Port Harcourt.

The couple are now in the custody of the Family Support Unit of the State Criminal Investigation Department, SCID, Akwa Ibom State Police Command, where they are being interrogated.

The Commissioner of Police, Mr. Zubairu Muazu, confirmed that the eldest son, Ekpo has been recovered while efforts are being intensified by detectives to track down and recover the other two.

Muazu disclosed that the incident came to light when the younger brother of Ruth became curious about the sudden absence of the children of his sister. He asked the brother-in-law, Magnus, about them and got less-than-satisfactory answer from him.

“His further probe led to an altercation between them. Magnus later confessed his evil deed. Ruth’s brother was incensed by the horrific thing he heard and a fight broke out between him and Magnus. He was said to have beaten his in-law black and blue.” The Sun reports.

Ruth rushed to the Mkpat Enin Police Station to file a complaint against her brother on October 23, 2017. In the course of questioning to ascertain the facts, Muazu explained that the truth was revealed and she was detained. Her husband was also arrested and the case was transferred to the State Criminal Investigation Department, Uyo, Akwa State capital, from where the matter was handed over to the Anti-Human Trafficking Section of the SCID on November 2, 2017.

Then November 9, Magnus led detectives to Aba, Abia State, to arrest the nurse, Stella Uchendu, 40, who arranged the illegal deal. She in turn took detectives to the home of Joy Ikechukwu, where Ekpo was recovered.

Police detectives also arrested another suspect, Eucharia Daniel, who bought the three-day-old baby for N300,000 naira from Uchendu. He said that Uchendu passed on the baby to Joy Ikechukwu, who resold the newborn child to Judith Solomon Charles, for N500,000.

Sunday Sun further learnt that on the day that police detectives brought Joy to her home, Judith was said to have slumped in shock. Detectives quickly rushed her to a hospital, where she died.
Magnus told Sunday Sun that he sold his children due to financial problem.

“My first wife and I had six children. She had mental problem and later died. Then I got married to Ruth in 2007 and we had four children. This thing happened when I had financial problem. I sold my three sons and left our daughter, Favour, who is five years old. I sold each of them for N50,000 to Stella Uchendu. Whenever my wife’s uncle and other people asked me about the children, I always told them that I took the children to people who will help them. Later I confessed to my wife’s uncle that I had sold the three children. That was when he fought with me and beat me very well before neighbours rescued me. My wife reported to the police.”

Contrary to her claims,  Magnus insists that his wife knew that he was selling the children, adding that after selling the three-day-old baby, he gave her N20, 000 naira.

In her own account, Ruth, who married Magnus in 2007, denied any complicity in the sales of their children.

“My husband didn’t tell me that he sold our three sons. I gave birth to four children – three sons and a girl, Favour, who is five years old. My husband only told me that he took the three children to his uncle in Port Harcourt to train them. One day, he dialed a number and gave the phone to me to speak with his sister, who he said was taking care of my three children.

“I remember that in September, this year, after I gave birth to a baby boy in the church, on a Thursday, my husband took the baby from me on Sunday of that weekend and sold it. My husband and the nurse deceived me by saying that the baby and I tested positive to HIV and so the baby was taken away. Later my husband gave me N20,000 to eat food and recover from the pregnancy.” She stated.”

On her part, the nurse, Uchendu, admitted that Magnus had informed her that he could no longer cater for his three sons and expressed interest in selling them off. She agreed to buy the three sons.