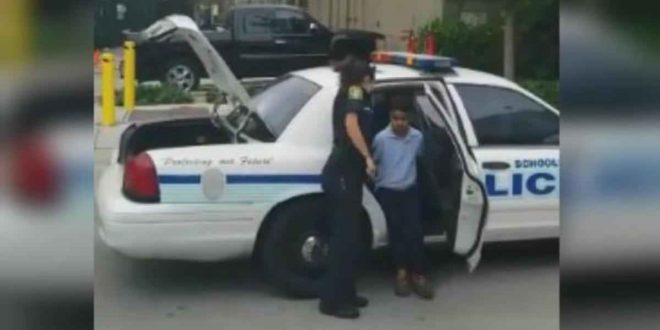 Authorities in Miami arrested a 7-year-old boy who repeatedly punched his teacher for disciplining him.

According to Police report, the first grader attacked his teacher with a series of punches in the cafeteria after he was disciplined in front of her students .

Police said the child was caught playing with his food at the Coral Way K-8 Center, when the teacher decided to take him outside to punish him. While attacking the teacher, they both fell to the ground where the boy grabbed the teacher’s hair and punched her repeatedly.

Following the attack, the police were called to the school and the young boy was arrested and taken to a local hospital for a psychiatric evaluation.

According to Fox News, he was later discharged from the hospital.

The Maimi authorities also added that the latest violent attack is the second time in three months that officers were called to the school over the young boy’s attitude.

The child’s mother, Mercy Alvarez, who spoke to the press, defended her son, saying he doesn’t have a mental disorder. Instead, she called her son’s arrest “police abuse.”

“If my child wasn’t aggressive anymore when we got there, like they were saying he was before, why take such extreme measures?” she said.

Alvarez said her child didn’t show aggressive behavior at home until the school year started; she said in past years he had gotten good grades, participated in other activities and behaved well.

“This is too much for a boy that age to go through. It can’t be a normal procedure,” she said.

Meanwhile, the video of the boy being arrested in handcuffs is causing an outrage online, as many are saying it was unlawful to arrest a 7-year-old.