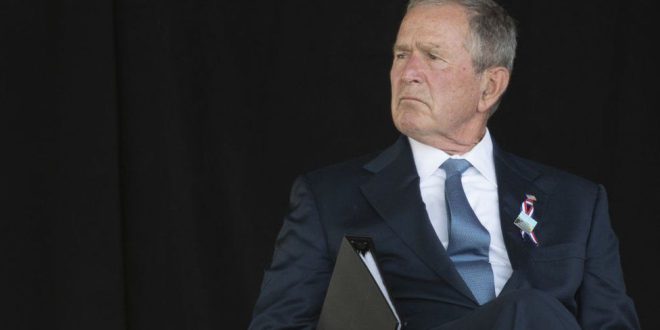 An Islamic State sympathiser planned to murder former US President George W Bush but the plot was discovered by the FBI, US authorities have revealed.

The suspect, a resident of Ohio, allegedly sought to have Iraqi operatives smuggled into the US from Mexico for the operation.

He is now in custody and appeared at a federal court in Ohio on Tuesday.

The FBI used informants and electronic surveillance to foil his plan.

According to court documents, the suspect – identified as Shihab Ahmed Shihab, 52 – is an Iraqi national who has been in the US since 2020 and had a pending asylum application.

The FBI claims that Mr Shihab told a confidential source, a purported people smuggler, that he belonged to a group known as Al-Raed – Arabic for thunder – which is based in Qatar.

In conversations with the FBI source, Mr Shihab said he wished to murder Mr Bush for “killing many Iraqis” and “breaking apart” Iraq.

He added that he hoped to take part in the operation personally “and did not care if he died, as he would have been proud to be involved”.

Mr Shihab was allegedly seeking fake police badges and was inquiring about whether militants could be smuggled across the Mexican border to conduct the operation and then smuggled back out to escape.

Two people he hoped to smuggle in to the US were described as former Iraqi intelligence agents with experience in assassination operations.

Mr Shihab was also allegedly in touch with a second FBI source who claimed to be a client for the faux smuggler. Both informants recorded meetings with him.

Mr Shihab allegedly told the sources he hoped to use the people smuggling service to bring Islamic State members into the US, though he is not accused of being a member of the terror group.

In one instance, Mr Shihab and one of the informants drove to Dallas, Texas to take video of Mr Bush’s residence and the George W. Bush Institute.

In March 2022, he allegedly held a meeting in a Columbus, Ohio hotel room to look at weapons and fake law enforcement uniforms.

He now faces 10 years in prison for attempting to bring someone illegally into the US, and another 20 for aiding and abetting the attempted murder of a former US official.

A spokesman for Mr Bush said the former president “has all the confidence in the world in the United States Secret Service and our law enforcement and intelligence communities”.