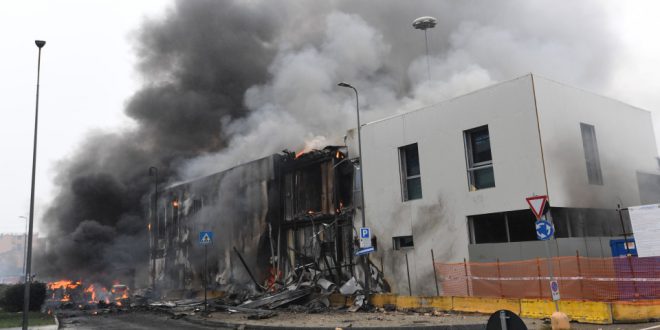 A plane has crashed into a two-story office building in a Milan suburb killing all eight people on board.

The single engine plane was on its way to the island of Sardinia when it came down and burst into flame near a subway station in San Donato Milanese.

Firefighters rushed to the scene but the pilot and passengers – who included a boy – died at the scene.

The plane was being flown by Dan Petrescu, a 30-year-old German citizen born in Romania, Corriere Milano reports.

Among the seven passengers who died with him was a 65-year-old Romanian, who held a French passport.

According to the Romanian newspaper Adevarul, Petrescu was a property tycoon worth 3 billion euros.

People in the area could hear a blast when the plane collided with the building.

Witnesses have recalled the moment the plane plummeted out of the sky and smashed into the building, which was thankfully empty .

“The plane was low. And then there was a lot of smoke, flames in the sky. Pieces were flying. I was very scared.”

Emergency workers said several cars in a nearby parking lot were set ablaze, but apparently the vehicles were unoccupied at the time.

The Pilatus PC-12 single engine plane was flying between Milan’s Linate airport and the Italian island of Sardinia.

The aircraft took off from the main runway at Linate airport at 1.04pm local time but crashed 11 minutes later.

It performed a right hand turn that would have taken it on its route to Olbia in Sardinia but instead of heading south it went towards San Donato.

“The plane hit the building on the facade, with an extremely violent impact,” said Carlo Cardinali from Milan fire brigade.

“The pilot made a turn, so he noticed some anomaly.”

Firefighters were extinguishing the flames of the now-charred building, which reportedly was under renovation.