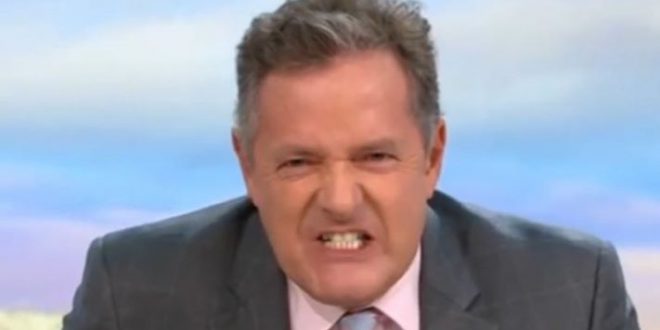 Piers Morgan stormed off the set of Good Morning Britain on Tuesday after his co-presenter, Alex Beresford, criticised the way he “continues to trash” the Duchess of Sussex.

His co-host, Susanna Reid, was forced to send the ITV show to an early break after the row boiled over and Morgan walked off live on air. Beresford called his behaviour “pathetic” and “diabolical”.

The pair had been discussing the Duke and Duchess of Sussex’s tell-all interview with Oprah Winfrey, which aired in the UK on Monday night, that threatens to have devastating repercussions for the reputation of the UK monarchy.

Among the most damning disclosures in the interview was the claim that a member of the royal household had asked Prince Harry about how dark the skin tone of their baby son, Archie, would be.

Buckingham Palace is under mounting pressure to respond to the racism allegations in the interview, which Harry has made clear are not related to his grandparents, the Queen and Prince Philip.

In the exchange on Tuesday morning, the GMB weather presenter Beresford noted the “overwhelming” amount of negative press Harry and Meghan have been subject to since they got engaged and the impact it has had on the couple’s mental health.

Speaking to Oprah, Meghan detailed how her mental health had deteriorated while she was pregnant amid the barrage of negative press and lack of support from the firm, which had repeatedly turned down her appeals for help and discouraged her from leaving the house for months.

She disclosed that she had suicidal thoughts during that time and was afraid to be left alone. “It was all happening just because I was breathing,” Meghan said. “I just didn’t want to be alive any more. That was a clear, real, frightening and constant thought.”

In reference to Morgan’s previous claim that he used to speak to Meghan and she “dropped him” once she started dating Harry, Beresford told him: “She’s entitled to cut you off if she wants to … yet you continue to trash her”.

Beresford said: “I understand that you don’t like Meghan Markle, you’ve made it so clear a number of times on this programme, and I understand you’ve got a personal relationship with Meghan Markle and she cut you off. Has she said anything about you since she cut you off? I don’t think she has but yet you continue to trash her…”

Morgan, 55, then stormed out of the studio, saying: “OK, I’m done with this, sorry, no, can’t do this.” Beresford called his behaviour “pathetic” and “diabolical”.

Morgan later returned to the set and the discussion of the Sussexes’ interview resumed.

The ITV chief executive, Carolyn McCall, said a senior executive at the broadcaster had talked to Morgan about his criticism of Meghan.

Morgan, a former CNN presenter, has previously criticised the couple and said they sought publicity on their own terms without the scrutiny that came with the job.

His comments that he did not believe Meghan’s disclosure that she had suicidal thoughts have drawn criticism from the mental health charity Mind, which said it was “concerned and disappointed” by them.

The charity said: “It’s vital that, when people reach out for support or share their experiences of ill mental health, they are treated with dignity, respect and empathy.”

McCall told reporters that Kevin Lygo, ITV’s director of television, had spoken to Morgan in recent days about his comments. She added that she had not spoken to Morgan or seen Tuesday morning’s programme yet as she had been presenting ITV’s annual figures.

She said ITV had many voices, was committed to supporting mental health and that the company could not control what Morgan said on Twitter. “ITV has many voices and we try and represent many voices on ITV every day,” she said, insisting GMB was “a balanced show”. “It’s not about one opinion.”

McCall added: “I completely believe what she [Meghan] said. It’s important everyone does.”