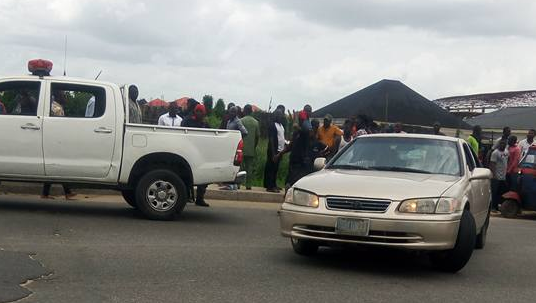 Pictures: One Injured As Robbers Engage Police During Daytime Robbery In Bayelsa

A policeman was injured while chasing armed robbers after an attack in Bayelsa state.

This happened after a gang of four armed robbers reportedly robbed their victims around Swali area in Yenagoa and escaped towards the Sani Abacha, all through the Isaac Borro Expressway.

Driving on a tricycle, popularly known as Keke, the suspected armed robbers allegedly stopped by another man on the roadside and collected N50,000 from him and zoom off.

According to Isedirikonghen Ebi AlhaJi, the helpless man then raised alarm on sighting a Doo-Akpo security patrol van which contacted other vans and engaged them in a chase.

On getting close to them around the Opu-Nembe Motor Park opposite the Commissioners Housing Estate, the robbers highlighted from their Keke and opened fire on the police, hitting one on his leg.

Sensing that the police were closing on them from all corners, the robbers jumped into the drainage canal, evacuating flood waters to the Epie Creek. In that process, two of the robbers were apprehended while two others are currently hiding inside the overgrown weeds on the canal.

The police took them to the station alongside the tricycle they used in the operation while all corners were cordoned off by different patrol vans, in search for the fleeing robbers.