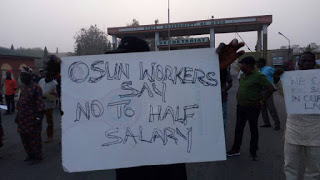 Workers in Osun state on Wednesday morning began their indefinite strike earlier declared by their union leaders as they shut down the Secretariat of the state government in protest.

The Nigeria Labour Union, Osun state chapter had declared an indefinite strike over the modulated salary being paid for over two years now by the Governor Rauf Aregbesola led administration.

The workers were last week directed not to return to work this week as they vow not to receive half salary from the state government again.

Our correspondent gathered that entrance to the state secretariat in Abeere had been blocked by the striking workers as early as seven not only in compliance with the strike order but also monitor and turn any erring worker back home.