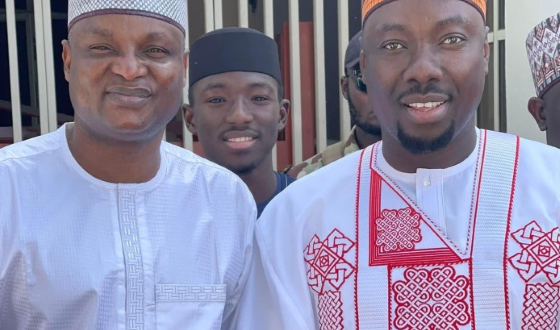 The last time Obinna Iyiegbu, socialite and businessman also known as Obi Cubana, and Abba Kyari, former head of the Intelligence Response Team of the Inspector-General of Police (IGP), were publicly seen together was in Oba, Anambra State.

Obi Cubana had organised a talk of the town burial for his mother in July 2021 and one of the guests was Super Cop Kyari.

Between that time and now, both men have been in the eye of the storm.While Kyari, a Deputy Commissioner of Police, was suspended from the force after an indictment by the FBI, the Economic and Financial Crimes Commission (EFCC) detained Obi Cubana for days over alleged money laundering.

He was subsequently picked up by the National Drug Law Enforcement Agency (NDLEA) over alleged ties to drug barons in Asia.

But at the wedding Fatiha of Maina Alkali, son of Inspector-General of Police, on Saturday, Obi Cubana and Kyari exchanged banters.

Dressed in northern attire, the socialite mingled with the high and mighty in the society.

Kyari, who hails from Borno, also had a nice time at the occasion held at the palace of the Shehu of Borno.

The event was attended by governors, ministers, senators, and influential businessmen, including Alhaji Aliko Dangote.

Below are pictures of the duo.