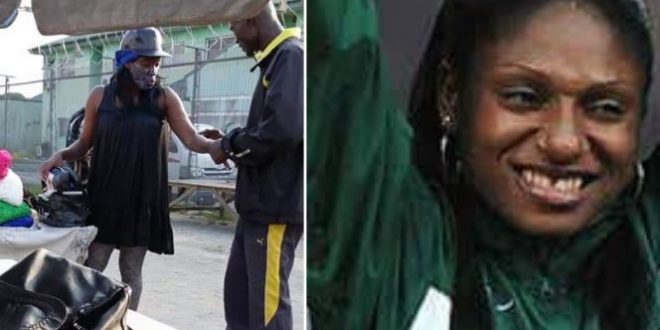 Nigerian Olympic female silver medalist, Gloria Kemasuode, who has been roaming the streets of Yenagoa, the Bayelsa State capital in rags is currently receiving medical attention over issues of mental unstableness, at the Federal Medical Centre (FMC), Yenagoa.

She has attracted sympathy from sports lovers and residents of Ovom community, where the Samson Siasia stadium is situated.

She was in the Nigerian 4 by 100 meters women’s team that won gold at the Africa Championship in Addis Ababa, Ethiopia earlier in 2008, returning in a time of 43.04 seconds. Kemasuode was also part of Nigeria’s quartet at the 2008 Summer Olympics in Beijing, China that finished third in the women’s 4 by 100 meters relay alongside Agnes Osazuwa, Oludamola Osayomin, Ene Franca Idoko and Halimat Ismaila clocking 43.04 seconds, finishing behind a Russian and a Belgium.

In 2016, Russia were disqualified and stripped of their gold medal due to doping violations, thereby promoting Gloria and her teammate to silver medal position.

In his visit to Bayelsa in order to assess her health condition, President of the Athletics Federation of Nigeria, Engineer Ibrahim Gusau says the AFN will continue to take care of the needs of the nation’s serving and retired Athletes. The AFN President stated this at the Federal Medical Center, Yenagoa, capital of Bayelsa State.

Engineer Gusau who was accompanied by a Doctor from the Federal Ministry of Sports said he was pleased to have seen Gloria in a stable condition, pledging that the AFN would continue to monitor the situation.