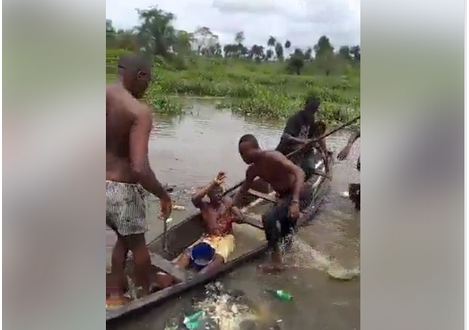 A suspect cultist was seriously dealt with after he was caught by residents of Opolo, a suburb in the capital city of Bayelsa, Yenagoa. According to reports, the suspect was allegedly notorious for robbing and killing his victims during operation.

He was caught by armed youths who tracked him down to his hideout across the river and brought him back to their area in a canoe.

On seeing him, the angry youths used machete, axe and other weapons to attack him and cut his hand in the process, in a heartbreaking video shared online. Watch below.

This is happening days after two suspected armed robbers were killed by mob action in the same Opolo Community.

The suspects were caught by the residents and beaten to death with stones after they were spotted trying to rob mobile phones from a Keke Napep with locally made pistol.

Previous 16 years old JSS-2 student arrested over illegal possession of pistol and robbery
Next BREAKING: I Am Ready For APC Governorship primary – Ambode