The police in Imo State have arrested two members of a child trafficking syndicate. 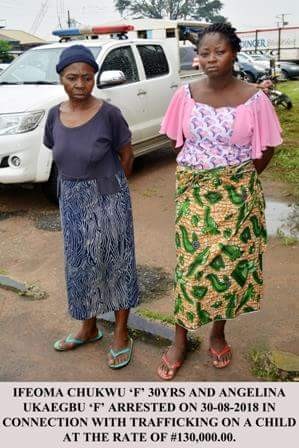 Parading the suspect and others at the command’s headquarters in Owerri on Wednesday, the state Commissioner of Police, Dasuki Galadanchi, said the Ifeoma Chukwu, 30, of Umuobom in Ideato South LGA but resident at Umueze Ndegwu Owerri West LGA, sold her newborn to Angelina Ukaegbu, of Onicha Ezinihitte Mbaise LGA, for N130,000.

“On 30/08/2018, operatives of Ogbaku Police Division arrested the above named suspects in connection with child trafficking. The first suspect, Ifeoma Chukwu got pregnant and was delivered of a baby boy. She subsequently sold the child to the second suspect, Angelina Ukaegbu at the sum of One hundred and thirty Thousand Naira (#130, 000.00). The sum of (#117, 000.00) part of the proceeds of the sale has been recovered as exhibit and investigation is in progress. “