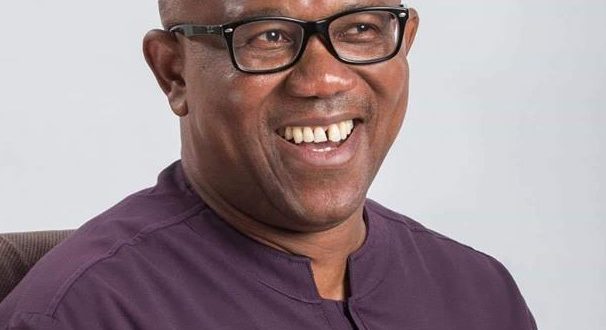 Peter Gregory Obi: Complete profile of the man who may be the next Vice-President

Here is the complete profile of Peter Gregory Obi, named Friday as Atiku Abubakar’s running mate in the 2019 elections.

. Former Chairman: Board of Securities and Exchange Commission (SEC)

In my capacity as the Governor of Anambra State, I served as a member of:

*Federal Government Committee on Negotiation with Labour on Subsidy

*Sub-Committee on Needs Analysis of Public Universities in Nigeria

2015: Golden Jubilee Award from Catholic Diocese of Onitsha for outstanding contribution to quality healthcare delivery in St. Charles Borromeo Hospital in particular and Anambra State in general, on the occasion of the Golden Jubilee celebration of the hospital.

*2014: Nigerian Library Association Golden Merit Award for remarkable improvement of libraries in Anambra State, exemplified by our Government’s construction of the Kenneth Dike Digital State Library, remarkable upgrade of the Onitsha Divisional Library, and provision of library facilities in secondary schools across the State.

*2014: Champion Newspaper Most Outstanding Igbo Man of the Decade.

* 2014 The Voice Newspaper (Holand) Achievers Award for Outstanding Example in Leadership and Governance.

*2013: Silver Bird Man of the Year (with Governor BabatundeFashola of Lagos State).

*2012: The Golden Award on Prudence – by the Methodist Church of Nigeria as the Most

* 2012: Leadership and Good Governance Award by The Ezeife Leadership Foundation Award for restoring peace and harmony to Anambra State.

* 2012: Outstanding Financial Planner and Manager – by the Church of Nigeria, Anglican Communion for my resourcefulness and creativity in governance.

*2010: ICT Governor of the Year – by the West Africa ICT Development Award.

INTRODUCTION OF CONSTITUTIONAL AND OTHER MAJOR CHANGES IN NIGERIAN POLITICS

*He was the first gubernatorial candidate in Nigeria to legally challenge to its logical conclusion, his governorship electoral victory that was denied him. He won in the Courts and reclaimed his mandate.

*He was the first Governor in Nigeria to legally challenge his wrongful impeachment and was reinstated by the Courts.

*He was the first Governor in Nigeria to seek the interpretation of tenures of Governors when INEC allowed elections to take place in Anambra State when his tenure had not expired; the election already concluded was cancelled and he was allowed to complete his tenure.

*He was the first Governor to serve a 2nd term in both the new and old Anambra State, that is, almost 40 years after creation of the State.

*He was the first Governor, whilst still in Office, to be appointed a Special Adviser to the President.

*He was the first serving Governor to be appointed into the Presidential Economic Management Team.

*He was among the first Governors to be honoured with a National Award in 2011, while still in office.

*Though the only Governor whose political party was in government in only one State, he was elected Vice-Chairman of the Nigeria Governors’ Forum twice.

*Though the only non-PDP Governor in the South-East (made up of 5 States), he was elected by the other 4 PDP Governors as their Chairman for 8 years rather than the usual one year.

b: Our Lady of Lourdes Hospital, Ihiala;

His Government also built the Joseph Nwilo Heart Centre in St. Joseph, Adazi-Nnukwu, where heart operations are now being performed.

18 As part of the efforts to turn around the economy of the State, a number of companies were attracted to build their facilities in the Anambra State. A case in point is SABMiller, the 2nd largest brewery in the world, which built their first Green Field facility in the State, which is today one of the most successful facilities they operate globally.

26 His Government, for the first time, undertook the aerial mapping of Awka as well as the production of Structure Plans for Awka Capital Territory, Onitsha and Nnewi.