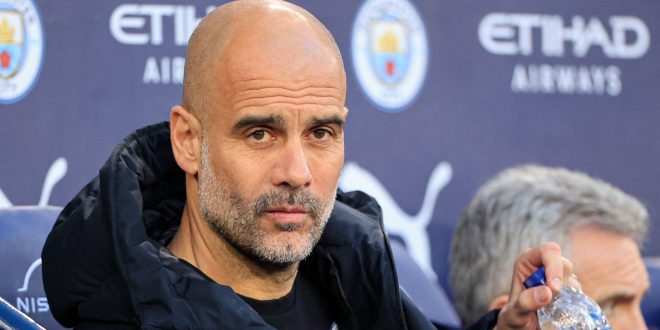 But United fans must wear the sky blue of City to join the celebrations. The Etihad boss was unaware Manchester will be blue today – with United fans praying City beat Aston Villa to make sure their arch-rivals Liverpool don’t win the title.

If Liverpool snatch the crown from City and beat Real Madrid in the Champions League Final in Paris next Saturday, Jurgen Klopp’s men would eclipse United’s 1999 Treble. “Are you sure? Yeah? So United likes City more than Liverpool? Oh my God, I didn’t know it” laughed the Spaniard, adding: “Is it true?

“So I was wrong when I say everyone wants Liverpool to win the title in this country! I was wrong. Yeah, welcome (United fans). Welcome. If they want to join us in the street. But they have to wear the blue shirt, yeah. They have to wear it!”

If Liverpool pull off their second Premier League title win in three seasons it’d mean they’d square up their overall top-flight championship wins with United at twenty each – another major blow after a shocking season at Old Trafford which has seen them slump to sixth and potentially seventh place.

Guardiola has made headlines in recent weeks for his comments regarding who neutral want to win the title and was asked about his perspective once again. “I’m sure my English isn’t good after four, five years. I said in the time you arrive in the titles, the teams with more history have more supporters,” the ex- Barcelona manager explained.

“It happens in Spain and Germany and Italy. We are outsiders in the last decade. In that moment, of course, people don’t want Liverpool or us to win. Liverpool fans want to win, I’m not saying all the country are Liverpool fans but in general they are a team with more titles.