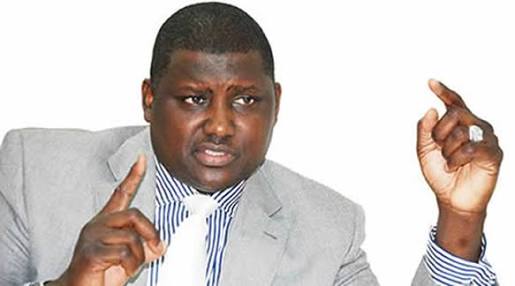 Some People Are Shielding Maina From Arrest – Magu

The acting Chairman of the Economic and Financial Crimes Commission, Mr. Ibrahim Magu, says his agency has been unable to arrest the wanted ex-Chairman of the defunct Presidential Task Force on Pension Reforms, Abdulrasheed Maina, because people are shielding him from arrest.

Magu said this during a telephone interview during breakfast television programme, Sunrise Daily, on Channels Television on Monday.

The EFCC boss did not say who was protecting Maina but maintained that operatives of the commission were not among those shielding him from arrest.

When asked if the EFCC operatives were also protecting Maina, Magu said, “No, it cannot be. Never! Never! He has people who are protecting him which made it difficult for us to get him arrested. You can imagine that he was promoted. It is very devastating and it is beyond my understanding.”

Asked if the EFCC was working on the theory that Maina may have fled the country, Magu responded in the affirmative, saying, “He has already been declared wanted by the INTERPOL and we are going into several countries to request their assistance particularly in Dubai, USA, and UK. We are already on a serious manhunt.”

The EFCC boss rebuffed claims that the seizure of Maina’s houses was reactionary.

Magu said when he took over at the commission in 2015, he was extremely busy and did not put Maina’s case on the front burner hence the late action.

He added, “When I came in, the matter was already in court and I was so busy pursuing other issues. You need to visit the EFCC to see the volume of work we have.”

He said he was dumbfounded as to how the fugitive was brought into the country and promoted despite being on the INTERPOL watch list.

Magu added, “I really don’t know what happened but I know he was properly placed on the watch list so he cannot sneak into this country without the knowledge of the law enforcement agencies. So, something is wrong somewhere and I think we need to look at that. It is just terrible and I just cannot believe it.”

The EFCC boss urged Nigerians and other security agencies to cooperate with the commission in stamping out corruption.

Magu said, “I want us to be fully committed to the war against corruption because it is the biggest problem in the country today and corrupt people are now celebrating.”

Meanwhile, the spokesman for the EFCC, Mr. Wilson Uwujaren, said the anti-graft agency had not made a fresh application to INTERPOL for the arrest of Maina.

Uwujaren said this in an email while responding to an inquiry by The PUNCH.

The EFCC spokesman said, “There is no fresh request sent by the commission. The only request was sent through a November 18, 2015 letter, to which a response came through a January 11, 2016 letter from the INTERPOL National Office, indicating that the bureau has taken action on the wanted fugitive as requested with INTERPOL General Secretariat, Lyon, France.”