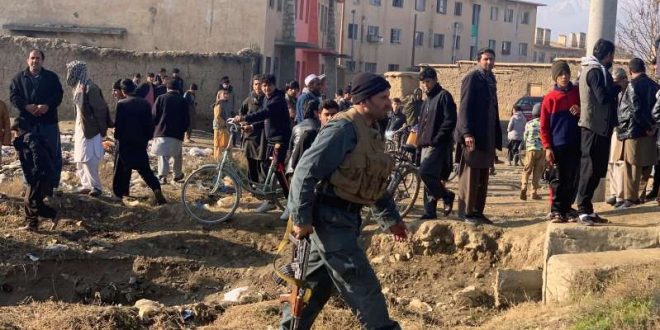 © AP Photo/Rahmat Gul Security personnel arrive near the site of an attack near the Bagram Air Base In Parwan province of Kabul, Afghanistan, Wednesday, Dec. 11, 2019.

Twelve Americans were killed on Thursday in two suicide bombings around the airport in Kabul, Afghanistan, where U.S. forces have been working to evacuate thousands of U.S. and Afghan civilians.

Marine Gen. Kenneth McKenzie, commander of U.S. Central Command, confirmed to reporters that 12 U.S. service members were killed and 15 others were injured. Numerous Afghan civilians were also injured by the blasts, which were determined to be carried out by ISIS fighters, McKenzie said.

“We have put more than 5,000 U.S. service members at risk to save as many civilians as we can. It’s a noble mission, and today we have seen first hand how dangerous that mission is,” McKenzie said. “ISIS will not deter us from accomplishing the mission. I assure you of that.”

One of the explosions took place just outside one of the gates at Hamid Karzai International Airport where U.S. personnel are processing individuals before boarding evacuation flights. A second explosion took place a short distance away near the Barton Hotel.

McKenzie indicated the attacks would not alter the ongoing evacuation mission, which as of Thursday was still set to conclude on Aug. 31.

“We continue to focus on the protection of our forces and the evacuees as the evacuation continues. While we’re saddened by the loss of life, both U.S. and Afghan, we’re continuing to execute the mission,” McKenzie said.

President Biden and Vice President Harris have been briefed on the attacks. Biden’s meeting with the Israeli prime minister, scheduled for Thursday afternoon, was postponed as he monitored events in Afghanistan. It’s unclear when Biden might address the public.

The president, Defense officials and lawmakers have in recent days warned of the increasing threat of a terrorist attack near the Kabul airport as thousands of civilians congregated in the hopes of evacuating the country ahead of the withdrawal of American forces on Aug. 31.

Four U.S. Marines were killed and three were wounded in an explosion at the Kabul airport Thursday, The Wall Street Journal reported.

Pentagon press secretary John Kirby later on Thursday confirmed “a number of U.S. service members were killed” in the airport attack, though he did not provide a number on the casualties.

“A number of others are being treated for wounds. We also know that a number of Afghans fell victim to this heinous attack,” Kirby said in a statement. “Our thoughts and prayers go out to the loved ones and teammates of all those killed and injured.”

The U.S. ambassador in Afghanistan’s capital alerted staff of the casualties, a U.S. official told the Journal.

The Hill has reached out to the Pentagon for comment.

Multiple explosions rocked the area around Hamid Karzai International Airport in Kabul on Thursday, killing and wounding a number of U.S. and Afghan civilians, the Pentagon has confirmed.

The “complex attack” took place near one of the gates of the airport and led to “a number of US & civilian casualties,” and a second explosion happened near the Baron Hotel, located a short distance from the airport gate, Pentagon press secretary John Kirby said in a tweet.