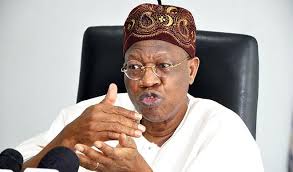 The Minister of information and culture, Lai Mohammed has said that the Peoples’ Democratic Party (PDP) will never come back to power.

The minister also said that Nigerians are happy with Buhari’s administration and will never give their votes to PDP.

This is coming after former President Goodluck Jonathan said that he will not sleep well until PDP regains power in 2019.

Speaking to newsmen in Jigawa state, during the National Council on Tourism, Culture and National Orientation, Mohammed said that Buhari has delivered on most of his campaign promises.

According to the minister, “Buhari’s administration has succeeded in ensuring the security of Nigerians’ lives and properties, boosting the economy, enhancing agricultural sector among several issues,” Vanguard reports.

Meanwhile, the National leader of the All Progressives Congress (APC), Bola Tinubu, has said there is no automatic ticket for President Muhammadu Buhari for the 2019 election.

Previous Ex-VP Atiku Abubakar Dumps APC
Next Nigeria Consumes 1.5M tons of Chicken Yearly but Produces Only 30% of it – Gbolade