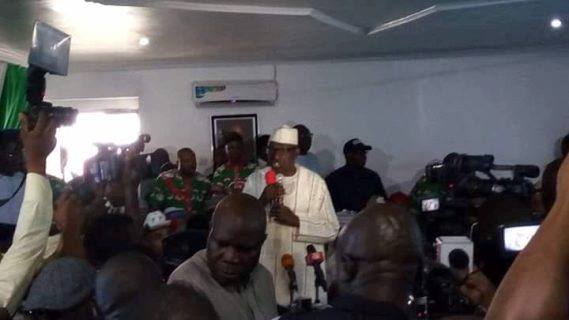 Peoples Democratic Party, PDP, has extended the tenure of Senator Ahmed Markafi led national committee of the party by one year.

The party reconvened at the Rivers state secretariat of the party on Aba road in Port Harcourt Wednesday after armed to the teeth security operatives sealed off Sharks stadium, the initial venue of the convention.

Before extending the life of the national Caretaker Committee, Minority Leader of the House of Representatives, Hon Leo Ogor moved a motion to amend the agenda of the convention.

Elections of national officers was finally removed from the day’s business.

Deputy President of the Senate, Senator Ike Ekweremadu moved the motion for extention of the tenure of the Senator Markafi led national Caretaker Committee.

It is expected that within the life of the new CTC, all court cases would be resolved. The party also expanded the number of the national Caretaker Committee members to 13. And the members were told not to contest for any office when the party will be ready for the election of national officers.

The national Caretaker Committee Chairman, Senator Markafi in his acceptance speech promised to rebuild, unite and restore the glory of the party.

Some leaders of the party sited at the venue while the convention was ongoing were the Chairman of the national convention planning committee and governor of Rivers state, Nyesom Wike, his Ondo state counterpart Dr Olusegun Mimiko, governor Ifeanyi Okowa of Delta State, senate Minority Leader, Godswill Akpabio.

Charles Igbinidu is a Public Relations practitioner in Lagos, Nigeria
@https://twitter.com/ionigeria
Previous I did not seal off PDP convention venue – Rivers CP
Next Germany beat Nigeria 2 – 0 in Olympics football Semi-finals