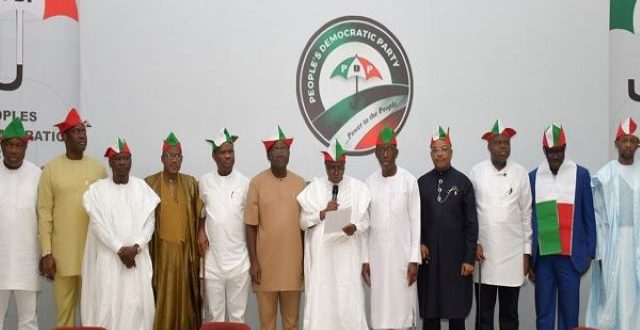 The Peoples Democratic Party (PDP) Governors’ Forum has maintained that the National Assembly must approve electronic transmission of election results.

The National Assembly had rejected the proposal during a plenary on Electoral Act (Amendment) Bill.

But the PDP Governors insist the National Assembly must enact laws to make it possible.

In a ten-point -communique at the end of its meeting in Bauchi state capital on Monday, Chairman of the Governors’ forum, Waziri Tambuwa said: “On the Electoral Act Amendment Bill, the Governors identified the need for free, fair and credible elections in the country and called on the National Assembly to entrench Electronic transmission of results of elections in the nation’s electoral jurisprudence.”

The governors also condemned the attempt to foist on all political parties, one method of conducting primaries, that is, by direct method only, through the Electoral Act Amendment Bill.

The Governors noted that the method is prone to massive rigging.

The Governors advised that political parties should be allowed to decide whether to use the direct or indirect method of conducting primaries as part of internal democracy in political parties.

On the Electoral Act Amendment Bill, the governors identified with the need for a free, fair, and credible elections in the country and called on the National Assembly to entrench Electronic transmission of results of elections in the nation’s electoral jurisprudence.

The governors further called on the Nigerian Communications Commission (NCC), especially, the Universal Service Provision Fund (USPF), Nigerian Communications Satellite Ltd (NIGCOMSAT), Telephone Companies (Telcos) and all relevant stakeholders to ensure that universal access and service of Information and Communication Technologies (ICTs) are provided especially in rural, un-served and under-served areas of the country before the 2023 General elections.

The PDP Governors enjoined all Nigerians of goodwill to take advantage of the ongoing registration of Voters by INEC to register to vote, thereby arming themselves with the necessary tools in the struggle to “rescue Nigeria from the APC maladministration”.

They also accused President Muhammadu Buhari of turning the Presidential Villa to the All Progressive Congress (APC) secretariat.

The PDP governors said the villa which belongs to all Nigerians has been turned to the new APC headquarters, where “coerced PDP members” are being paraded at intervals.