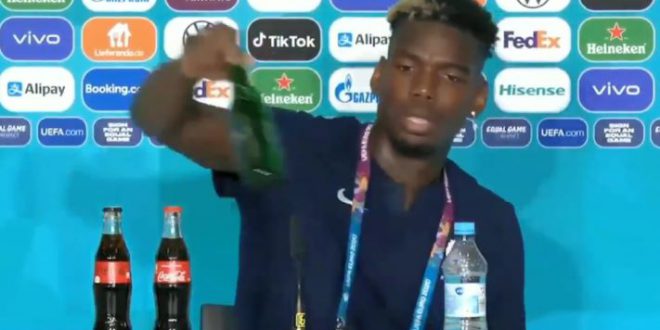 The devout Muslim moved the beverage from the table in front of him following France’s 1-0 win against Germany on Tuesday night.

Pogba, who made a religious pilgrimage to Mecca along with Kurt Zouma in 2018, refused to endorse one of Euro 2020’s official sponsors as alcohol is forbidden for Muslims.

The 28-year-old has become the latest star to take a stance against the Euros’ sponsors after Ronaldo removed two bottles of Coca-Cola placed in front of him.

Fans were left disgusted with tournament staff as they suggested the Manchester United midfielder moved the alcohol-free beer bottle due to his faith.

One supporter fumed: “Putting an alcoholic beverage in front of a Muslim is straight disrespect… You can’t blame Pogba here.”

Another tweeted: “He’s a Muslim. Why put beer in front of him? Sponsors must be rational.”

A third added: “He is a Muslim you should respect his choice.”

Meanwhile, another stated: “Quite understandable that as a Muslim, Pogba wouldn’t want to be seen promoting beer.”

One simply stated: “Shoulda removed the Heineken logo/name behind him too.”

Charles Igbinidu is a Public Relations practitioner in Lagos, Nigeria
@https://twitter.com/ionigeria
Previous Former soldier jailed for 12 years for killing seven-week-old son
Next Premier League 2021-22 Fixture is out: Man Utd vs Leeds and Spurs vs City are picks of opening day