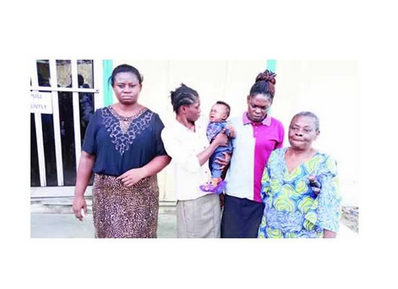 Pathetic: Grandma Sells Her Grandchild For N250,000 In Lagos

A 22-year-old mom, Blessing Emmanuel, and her grandma, Patience, 39, have been arrested for selling a day old baby for N250, 000 on Shola Adewunmi Street, Jakande Estate, Oshodi, Lagos.
According to reports, the baby was taken from Blessing by Patience, on the day he was born and handed over to one Ijeoma Okechukwu, their former neighbor. A few days after, Okechukwu paid them N250,000.

Blessing then told residents that her baby was dead, but later opened up to a church member, Comfort Ogwuebu, who helped her family with accommodation, that her child was with Okechukwu.

Ogwuebu reportedly alerted policemen from the Zone 2 Police Command, who arrested the suspect and recovered the child. Blessing revealed that she had earlier had a child for her boyfriend, Valentine, who got her pregnant the second time.

She said she resisted the pressure to abort the pregnancy because she didn’t want to die. The Akwa Ibom State indigene said she was bothered about what would become of the baby when her mother told her Okechukwu had agreed to take him after delivery.

Her mother, Patience, 39, said she had been weighed down by the burden of caring for her three children and Blessing’s first child before she came home with a second unwanted pregnancy.

The widow woman said she saw Okechukwu’s intervention as an answer to prayer, adding that she thought her assistance would help the family out of poverty. The alleged buyer, Okechukwu, 35, said she was only helping the family.

Previous Politician Says: “It Is Important For A Man To Beat His Wife”
Next Police Stray Bullet Kills 16-Year-Old In Lagos