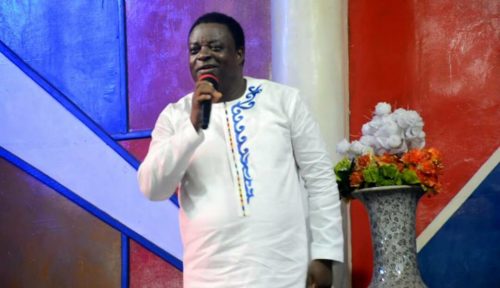 Nigerian-born Evangelist, Pastor Victor Ajisafe has been arrested by the Sierra Leone Police force is currently been questioned for allegedly using hate speech.
His arrest comes after the famous preacher, founder and President of the Sanctuary Praise Church had blasted prominent Islamic scholar and Grand Mufti of Zimbabwe, Mufti Ismail Menk over alleged claims that Sierra Leone is an Islamic state.

Ajisafe described Mufti as “a liar and an angel of Darkness who have come to deceive Sierra Leoneans”. He further added that Islam as a “religion of terrorism”.

Recall that Mufti was in Freetown on a two-days visit (Islamic lecture) mission on from 21 -23 September. Menk landed at the Lungi International Airport on Thursday, 21 September on the invitation of the Foundation of Islamic Information Sierra Leone (FOISIL) and held an inspirational lecture at the jam-packed National Stadium on Friday and at the Freetown Central Mosque at Rokupa. It is worthy to note that over 50,000 people filled the National stadium during Multi’s lecture, a record which is the first of it’s kind in the history of Sierra Leone.

Multi, during his visit to President Koroma at the state house lodge in Freetown has said that part of the reasons why he has visited the country was to sympathize with the victims of the August 14th Mudslide and Flood disasters and also pray for those who lost their lives, as well as for the country.

However, Pastor Ajisafe has countered his claim and his religion describing Islam as a “religion of terrorism”. The man of God said that Mulfti’s preaching about Jesus is not true. He also added Sierra Leone does no have a trace of Islam. “You have idol worshiping and Christianity, those are the two religion here.”, Ajisafe added. He further alleged that Ex Late Sierra Leone President, Alhaji Tejan kabbah sold Sierra Leone out to the Organization of Islamic Cooperation (OIC) through a back market.

Meanwhile, mixed reactions has trailed the speech of the famous Evangelist. While many has described it as an hate speech which could bring up hatred in a religious tolerant country like Sierra Leone, others have supported him claiming that Imam’s and other Islamic leaders are also known to use hate speeches against Christians in the country.

Some sects have called for his deportation back to Nigeria while others have threatened to burn down his churches across Sierra Leone.

Previous INEC Fixes February 16, 2019 For The Presidential And National Assembly Elections
Next Governors Want FG To Hand Over Federal Roads To States