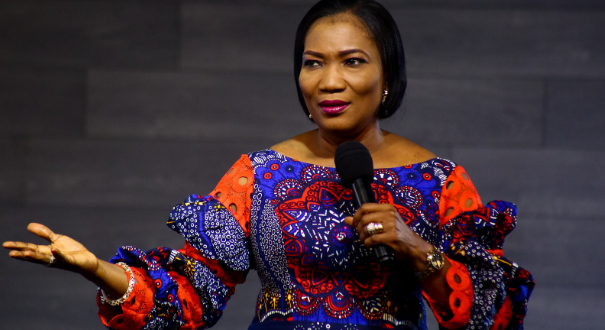 Nigerian preachers are coming out to show support for Reverend Funke Adejumo who has recently come under attack after a video surfaced showing her telling her Church members to sow a seed of N1 million for stupendous wealth.

The video which some quarters found offensive, has led to the signing of a petition to stop the female preacher from stepping into the UK. The petition has gathered about four thousand signatures.

However, some clergy men have called the petition an attack on Christianity. One of those who have spoken against the petition is Leke Adeboye, son of the general overseer of the Redeemed Christian Church of God, Pastor E.A Adeboye. In a social media post, he wondered why support for Funke Adejumo is not as loud as the one against her.

Joining the support for the female preacher is the General Overseer of the Omega Fire Ministries, Apostle Johnson Suleiman. In a Youtube video, he says,

“I was a journalist, there is nothing you will write about me that will get to me, I won’t even read it and now its a woman of God, Reverend Funke Adejumo that they are busy attacking. It is not right, it is not fair and it will not stand. We stand by her at this time. We pray for her that this will be promotion for her ministry…”

Rev. Mrs.Laurie Idahosa, the wife of Bishop F.E. Benson Idahosa, also lent support as she shared a picture with Funke which she captioned:

“I don’t need to write any long explanation. If you know me and what I stand for and you know her, you’ll know why #istandwithfunkeadejumo #awesomewomanofGod”

A new petition in support of Funke Adejumo has been launched on change.org, started by Temi Chris-Kuye, to counter the call to ban the reverend from stepping into the UK. The petition has gathered about ten thousand signatures.

“Call to ban Funke Felix Adejumo is a direct attack on Christianity. Unfounded malicious, defamatory and slanderous accusations are not lawful. Discrimination against a specific religious leader and denomination of a faith is indeed unjust and a prejudicial treatment.

“Article 9 of the Human Rights Act expressly states the freedom of thought, conscience, and religion. Funke Felix Adejumo is a Christian woman who has dedicated her life to serving humanity- she has built orphanages, Children’s hospital and shelter homes for women fleeing domestic violence.”

Previous Former APC Spokesperson Raises Alarm Over Fresh Plot To Arrest Saraki
Next 81 years old man, who fathered three children by his own daughter is jailed for four-and-a-half years