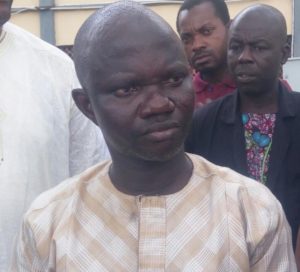 A pastor has been arrested in Ikorodu area of Lagos for running an illegal examination centre. The suspect, Adeniyi Joshua is the founder of El-Supreme Church, situated at No. 3, Oseni Adekogbe Street, Igbogbo, Ikorodu. The police said they received complaints from officials of the West African Examination Council, WAEC, on Joshua ’s criminal activities at the centre. Joshua’s arrest revealed his accomplices including a Physics student, Ife Adebola.

During the suspects’ parade at the Lagos Police Command on Friday, Adebola said his role was to solve examination questions usually forwarded to him through Whatsapp.

“We want credible supervisors that can conduct these exams, we have issues with supervisors snapping questions papers.

“We want to leverage on the goodwill indulge the ministry of education to nominate credible supervisor”. he added.

On the suspects’ arrest, Edgal Imohimi, the Lagos Commissioner of Police, the police busted the fake WAEC centre and recovered incriminating items including forged WAEC Question Papers and Answer Sheets.