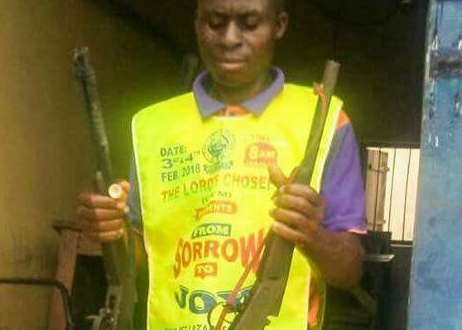 A Pastor of the Lord’s Chosen Charismatic Revival Movement, Pastor Stanley, B. Kagbara  is  said to have forcefully collected two guns from armed robbers that came to rob in their compound on the 21st day of February 2018 in Rivers state.

According to a statement by the church, Pastor Stanley, B. Kagbara; Pastor of Okogbe branch of Mbiama Autonomous Rivers State, after declaring himself a Chosen three consecutive times and calling on the God of his Pastor’s power which came over him and he overpowered the armed robbers and collected their their guns when they attempted shooting at him.

The area commander commended him for that bravery act and said he has never seen such act in Ahoada East and West of Rivers State, that this is the hand of God in action. He thanked the God of Chosen immensely for what He has done.

The pictures were taken at the Police station where the arm robber was detained.

Previous Kidnapped Lady Gives Delivers A Baby Boy After Being Rescued In Lagos
Next Why I Married My 17-Years – Old Sister, Nigerian Man Explains