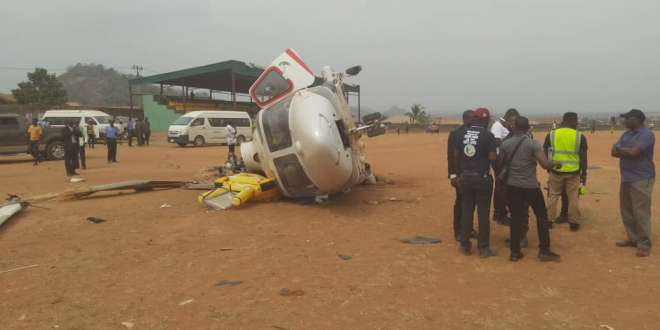 Vice-President Yemi Osinbajo on Sunday said God’s mercy and the special prayer of protection that the General Overseer of the Redeemed Christian Church of God, Pastor Enoch Adeboye, prayed for him last Friday were responsible for his escape in the helicopter crash.

Osinbajo said this on Sunday at a thanksgiving service held at the Redeemed Christian Church of God, Phase 11, Lokoja, the Kogi State capital.

The Vice-President, who escaped unhurt in a helicopter crash on Saturday said, “I was at the Redemption Camp last Friday although I came late, after the vigil, Papa Adeboye called me and asked how the campaign was going and I told him, it was going well. He then prayed for me and specifically said ‘God, you know how dear this my son is to me, please protect him.’

“He said the prayers continuously for more than five times. I believe God must have listened and decided to save my life and those in my entourage.”

Osinbajo said he believed that God and Adeboye’s prayers were responsible for his escape last Saturday.

He urged the members of the congregation to believe in the efficacy of prayers.

“Whether or not the devil likes it, we are moving to the next level,” he added.

Osinbajo added that no amount of thanksgiving and praises to God would be enough for saving his life and nine others in Saturday’s helicopter crash.

“Only God can take the glory for saving my life and those of the others on board,” he said.

The Vice-President said it would have been breaking news on local and international media that he and others had died in the crash but God did not allow such to happen.

“No amount of thanksgiving and praises to God would be enough for saving my life and nine others on board. God is the one, who can do all things, and only Him can take the glory; we return the glory to Him.

“We are here to say thank you. Thank you, Jesus. We bless His name forever and ever,” he said.

He prayed God to bless all the people that had celebrated with him in Kogi State, the nation and the world at large.

In Lagos, Adeboye led the congregation at the headquarters of the church at Ebute Metta, Lagos to thank God for saving Osinbajo in a helicopter crash on Saturday.

Adeboye, during the service, recalled that a word of prophecy came during the church’s Holy Ghost Service on Friday that no matter how hard the enemy would try, there would be no mourning in “our families this year.”

Addressing the congregation, he stated, “Would you please join me in thanking God that there is no mourning in our family this morning.”

On Friday night, he had said, “The Lord has asked me to tell someone tonight that it doesn’t matter what the enemy might try, there would be no mourning in your family this year.”

He asked the congregation to give glory to God for saving Osinbajo’s life.

According to Adeboye, the devil wanted to take Osinbajo’s life, but God put the devil to shame.

He, therefore, asked the congregation to specially appreciate God on behalf of the Vice-President and all those onboard the ill-fated helicopter, for his supernatural protection, saying Nigeria would not mourn.

In his sermon, entitled, “Carriers of Glory,” Adeboye said for anybody to carry God’s glory, he must be a true child of God and live a life of holiness.

Taking his lesson from the book of Matthew 5: 14-15 in the Bible, he said, “Ye are the light of the world. A city that is set on a hill cannot be hidden.”

Adeboye added, “As a carrier of God’s glory, anywhere you arrive, darkness will automatically disappear. When God begins to use you, the glory belongs to God, so you must learn to always give glory to God. Do not take the glory to yourself because it is not yours, it belongs to God.”