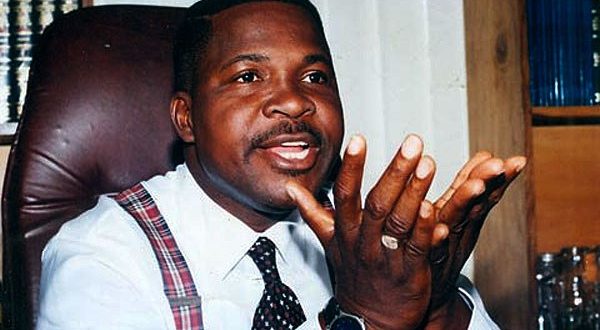 Justice Abulazeez Anka of a Federal High Court in Lagos on Monday vacated a freeze order on the account of a Senior Advocate of Nigeria (SAN), Chief Mike Ozekhome.

The interim order followed an ex parte application by the Economic and Financial Crimes Commission (EFCC), which had sought for a freeze order on the account, alleging it to be proceeds of crime.

In opposition to the freeze order, Ozekhome filed an application, seeking an order, discharging forthwith, the interim orders made ex parte, which ordered a temporary attachment of his money for 120 days.

He sought an order restraining the EFCC, whether by themselves or their privies, from dealing in anyway and manner as to the operation or the proprietary rights of the ownership of the account.

Delivering his ruling on Monday, Justice Anka vacated the interim freeze order, and dismissed the opposing counter-affidavit of the EFCC.

The judge said that although it was not in doubt that the said sum of money emanated from the Ekiti State Gov., Mr Ayodele Fayose, Ozekhome could not be held liable.

According to him, this was because there was no restriction on the said governor’s account before payment was made to the law firm of Ozekhome.

Anka said that the freeze order earlier obtained by the EFCC in respect of Fayose’s account had been vacated by Justice Taiwo Taiwo of the Ado Ekiti Division of the court.

The judge said that he would not be lured into sitting on appeal over counter-decisions of Justice Mohammed Idris, who ordered the freezing of Fayose’s account, and those of Justice Taiwo Taiwo, who later unfroze the account.

He held, “There is no argument whatsoever as to the source of the funds as rightly argued by learned counsel for the EFCC, Mr Rotimi Oyedepo.

“The question is, can the respondent/applicant be liable for any infraction as at the time he received the amount in his account?

“His evidence was not controverted that the said proceeds were unencumbered as at the time they were transferred into the account of Mike Ozekhome Chambers, as rightly argued by Chief Mike Ozekhome.

“In both the order and the depositions, the account was evidently and manifestly unfrozen, so such an argument, therefore, by Mr Oyedepo, Esq. cannot hold water.’’

The judge consequently held that sufficient grounds exist to reject the counter affidavit by the EFCC.

He said that considering the fact that the source of the fund of the respondent/applicant was derived from an unencumbered account, since the said governor’s account had been unfrozen, the contention of the EFCC could not suffice.

In his application, Ozekhome had argued that the application for an interim freezing of his account was done in bad faith by the EFCC, which he said did not comply with statutory authorities in obtaining same by a motion ex parte.

According to him, the respondent allegedly suppressed material facts in obtaining the order, which therefore, rendered the action unconstitutional, as same offends Sections 36, 37 and 41 of the 1999 Constitution.

Meanwhile, in its counter affidavit, the commission had asked the court not to allow the plaintiff access to his account in Guaranty Trust Bank, which has a balance of N75million.

EFCC had claimed that the money, which was paid to Ozekhome as legal fee by Gov. Fayose, was part of the N2.26 billion arms procurement fund, allegedly looted by a former National Security Adviser, retired Col. Sambo Dasuki.

The EFCC had said that in spite of the fact that Fayose was aware that it had immediately appealed the unfreezing of his account, he still went ahead to dissipate part of the contentious funds, paying a sum of N75million to Ozekhome.

The commission, therefore, urged the court not to unfreeze Ozekhome’s account.