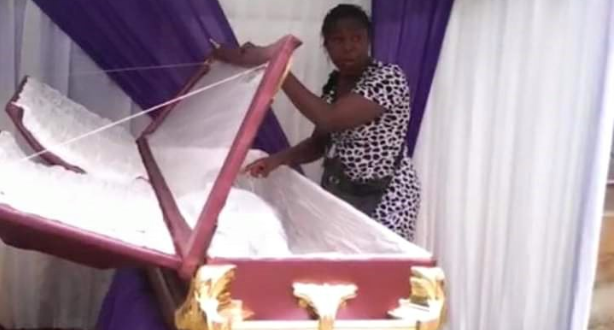 According to reports, late Mr Sunday Nwosu died almost 3 years ago (on the 10th of January 2016). His younger brother reportedly claimed and had been telling the family all this while that his brother’s corpse was in the mortuary. And he didn’t have money yet to bury him.

But on Friday, being the 23rd of November 2018, Mr Ikechuchkwu Nwosu invited few friends to a funeral service without the approval of his kinsmen. He brought back the supposed corpse of his brother Mr. Sunday and instructed it shouldn’t be opened.

It was gathered that the younger sister came without notice and forcefully opened the casket. And behold it was not Sunday’s corpse that was in the casket but a carved wood supposed to be that of their late brother.

Amidst her cries and laments there, no action was taken. And Mr Ikechukwu still went ahead to with the burial.

Now, some villagers want Mr Ikechukwu Nwosu to be arrested and asked where the corpse of his brother is.

Watch the video below;

Previous Metele Massacre: Soldiers Death Would Have Been Avoided If Service Chiefs Concentrated On Their Jobs – Atiku
Next Policeman Miraculously Survives After Being Shot Eight Times By Robbers