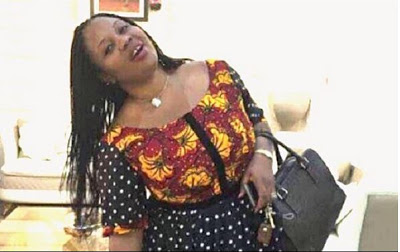 Uchenna Precious Onwuamadike: pleads for Evans her husband and family

A Twitter campaign begging for mercy for the arrested kidnap baron, Chukwudubem Onwuamadike, alias Evans sparked outrage from Nigerians today, with some calling the masterminds, mad.

The campaign with the hashtag #FreeEvans   followed an interview granted the Vanguard newspaper by Uchenna Precious       Onwuamadike, the Ghana based Evans wife, in which the woman pleaded for a second chance for a man she had married for 14 years. She      also asked for forgiveness for the  family.

In the interview, conducted on phone, the 31 year old lady and mother of four claimed she was unaware her man was a kidnapper. She said Evans always told her he was into spare parts business but he never for once took her to his shop.

She also said among other things that she was not aware her husband was rich as the only money he ever gave her was N200,000 when she was taking the kids to South Africa on holidays.

But she did admit that she suspected something was amiss as her husband was very secretive and also shielded them from attending social events.

The pleading met unbridled outrage from Nigerians on Twitter. Here are samples of the responses.

Excerpts of the interview Uchenna Precious  Onwuamadike gave to Vanguard:

In fact, while we were in Nigeria, he had never slept outside our house. My children were crying when they saw his bloody eyes and swollen face. Our condition was worsened when I saw my picture with him and our children on the face book. I don’t know where they got it. I have not been receiving money from him, I have never seen his money.

The only thing I know is that there was a time he bought an expensive watch in Dubai and I wanted to know why he bought it when he could not open any business for me. He kept on teasing me, claiming it came from a friend. It was only when we wanted to travel to South Africa last year Christmas where we spent two years that he gave me N200, 000 for the trip.

I have never seen him as a rich man. While with him, we made sure we had all we wanted to eat and that’s all. I can’t remember seeing any sign of affluence in him. He is not a proud man and he has been wearing one sandal and slippers for long now. He does not go for parties. In fact, I have never suspected him as a criminal. If I have been seeing any strange things, I would have suspected him.

We have three cars, one Hilux, one grand Cherokee and an SUV. The N20m they said he sent to me through transfer was given to one Hausa man to pay into an account in Ghana to be used in paying our rent and furnish the house in Ghana. I know he banks with GTB only. Their staff used to visit us in the house. I am not aware that he has five girlfriends and I have never suspected him because he did not keep late nights.

It was shocking to hear about his girlfriends. He did not answer calls in my presence. I used to see his phones being charged but he normally switched them off. I always asked him why use pin code to lock his phones and that he lived a secret life but he threatened to beat me if ever I touched any of his phones. I didn’t even know the security pin. He would leave the house sometimes in the evenings with his phones and would come back between 8pm and 9pm.

Most of the things I read about him are strange to me. As his wife, I should have seen the signs but I have not. He has cancer and does not drink alcohol nor smoke anything. I have never seen gun in our house. I don’t know where they got those frightening guns. He has never told me he has another house at Igando. Any time he went out, he always called to ask after the children and reassure me that he would be back soon. I am suspecting that whatever happened to him must have come from his father’s second wife. I don’t know what he did to him when he was young but he told the story. He said that after their mother was driven out of the house, he was with his brothers playing outside one day when the second wife called him to pick a bucket and collect water for her. He was four years then, he picked the bucket, collected water and when he came back, she removed her dress and she was wearing only a bag made from animal skin on her waist. She brought seven small stones from the bag, gave to Evans and ordered him to pour the stones into the bucket to know if the gravel would rise (sail) on top of the water or not. Evans said he did as she directed but the only thing the woman did was to take the bucket back and ordered him to go back and play with his brothers. He said he told his father later but he said he was telling lies.

I feel very bad because I did not know if he was doing all these or not. Even if he was into all these, why did he not stop because of me and his children? All the time when we pray, he used to promise God that he would tell Him his story later in life. Here reads psalm 23 a lot. Even his phone, he sets alarm for 12 noon to read psalm 23. He took part in our daily prayers in the morning, evening and night. He used to lead us in prayers.

We attend Anglican Church. He has never given them money to show off. We used to give N5000 or N10,000 and the highest we have given so far was N50,000 when we baptised one of our children. I am appealing to the powers that be to spare his life (crying), as I speak now, I am kneeling down with my children, crying and begging for forgiveness.

Have mercy on us. He did not know what he was doing. He did not know what came over him. I am ready to come back to Nigeria and plead on his behalf. What I am reading in the news is shocking. Though, I have not heard that he killed anybody but all those he injured or took their money should please forgive him because me and my children. They should kindly forgive him, he will repent. God knows I will not be alive and see my husband doing bad thing and keep quiet. All his wealth should be sold off and given to his victims. Evans is a good man. He takes care of all his relations including the children of the second wife we are suspecting did this to him.

He has just two houses in Ghana but I have never seen them. I saw the house on his phone. Since I have been living with him, he has never injured anybody or beat me. He has milk of human kindness in his heart. He has not been harsh or wicked to anybody. He always advised us to be prayerful I (starts crying again) and complains bitterly any time I failed to pray.

His neighbours also know him as a kind and generous man. Members of my family are worse hit by this ugly development. They said some people brought newspaper publications to show them about their in-law and they have been wondering if he actually did all that because he has been good to all of them. I am from a very good, God-fearing family and if any of us had suspected this in him, they would have forced me out of his house for long. I am ready to come back and testify on his behalf. I will also like to see the Governor of Lagos state and explain the whole thing to him. They said he is rich but I have only N13, 000 in my Diamond bank account. He does not give me money. He told me he will be paying N40, 000 into my account every month but after two months, he stopped, claiming that he was penniless