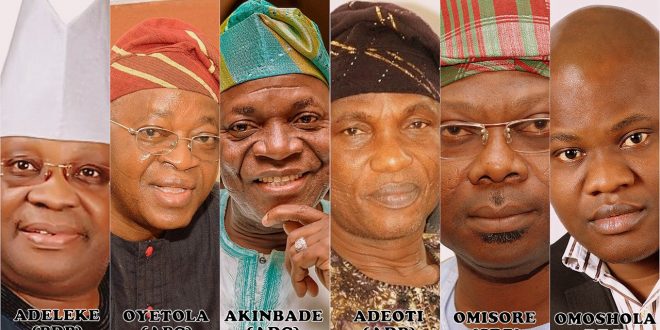 Osun is topping the headlines as the governorship race hits the top gear. The ruling party is striving to retain power, while the opposition is struggling to regain it. The state has been electrified with political campaigns, unfulfillable electoral promises, freebies and rallies.

The masses our politicians usually regard as unimportant has abruptly become the most important. The helmsmen and statesmen Osun people rarely see are now knocking on their doors daily to plead for votes. Davido is singing, but the terpsichorean Senator Adeleke is no longer dancing. Unpaid workers are suddenly being paid. Every candidate is acting cautiously in order to earn the highest votes on Saturday, 22 September, 2018.

Forty-eight political parties presented candidates, but the leading contenders, not listed in order of political strengths, are Fatai Akinbade for the Advanced Democratic Congress (ADC); Moshood Adeoti for the Action Democratic Party (ADP); Gboyega Oyetola for the All Progressives Congress (APC); Ademola Adeleke for the People’s Democratic Party (PDP); and Iyiola Omisore for the Social Democratic Party (SDP). Though many Nigerians think the PDP and APC candidates have an edge, the other three candidates are like the biblical David; underrating them is risky as they may spin a surprise.

This election is the most keenly contested governorship poll in Osun State. All the five major candidates are strong political figures with vast experience and a formidable support base. ADC’s Akinbade is a former state party chairman and ex-governorship aspirant under the PDP. He is also a former secretary to the Osun State government. ADP’s Adeoti is an ex-councilor, and former state party chairman of the defunct Action Congress (AC) and the Action Congress of Nigeria (ACN). He is also the immediate past secretary to the state government (SSG). APC’s Gboyega Oyetola is the immediate past chief-of-staff to the state government. PDP’s Adeleke is a serving senator representing the Osun-west senatorial district of the state. And SDP’s Omisore is an ex-senator and former deputy governor of the state.

Voter’s decision in the Osun election would be determined by a lot of factors. The ethnic politics being played at the federal level and other states of the federation is also reigning in Osun. ADP’s Adeoti has been playing the ethnic card. He is vigorously campaigning that the – unconstitutional but – conventional rule of rotating governorship position among the three senatorial zones of the state has been violated. Adeoti argues that since Nigeria returned to democratic rule in 1999, only the Osun-West senatorial district is yet to produce a governor out of the three districts in the state.

Omisore, has many supporters, loyalists and admirers in the Ife areas. Ife-Central and Ife-East has the highest number of registered voters after Osogbo, the state capital. Omisore will earn substantial votes in the Ife regions, but not as he did in 2014 when he lost to incumbent governor Aregbesola. The party he contested under in 2014, the PDP, has a better structure and membership than his current party, the SDP. Under the PDP, Omisore came second in the 2014 election with over 200,000 votes in less than seven local governments.

Omisore’s governorship ambition is plagued by negative public opinions. Majority of the Osun population believes he ordered the assault on late Senator Isiaka Adeleke when they were both competing for the PDP governorship ticket in 2014. Omisore also has also been unable to erase the public perception that he is complicit in the assassination of Bola Ige, Nigeria’s ex-Attorney General. Even though Omisore has been tried and acquitted, his political opponents still raise the dust on Ige’s assassination during election season. As a veteran contestant with political structures across the state’s 30 local governments, Omisore’s accrued votes will predictably rank him among the top three, but may not earn him a win.

The ADC candidate, Fatai Akinbade, is not less good for the job, but he has a slim chance. His major backbone are yesterday’s men – former governor Olagunsoye Oyinlola and ex-president Olusegun Obasanjo. The duo’s power and capacity have diminished so much that their lead backing can’t earn Akinbade a win. Obasanjo and Oyinlola are still influential, but their endorsement is just that extra support every candidate needs, they are not a strong winning determinant. Moreover, Akinbade scored below 10,000 votes when he was the governorship candidate of the Labour Party in 2014. In this election, Akinbade’s sole aim may be to frustrate the winning chance of the PDP, the party he recently left when he couldn’t secure the governorship ticket.

PDP’s Ademola Adeleke has a bright chance in this election, but he needs to make last minute efforts to further convince the voters that he has the intellectual ability to govern Osun, despite being less educated. The opposition is making political gains from Adeleke’s insufficient education and such may affect his victory. Nevertheless, Nigerians currently place less priority on the educational qualification of electoral candidates. Adeleke’s inadequate education may not affect his chances considering that Nigerians sacked Dr Goodluck Jonathan and elected a less educated Muhammadu Buhari as president in 2015.

The police on 19 September, 2018 invited Adeleke for arraignment over allegations that he was involved in examination malpractice and criminal conspiracy during the NECO examination he registered for in 2016. The presidency has reportedly instructed the police to stay action till after the election. President Buhari’s action on Adeleke’s case is constructive and highly commendable. But then again, Adeleke’s tribulation is a lesson that one must always plan for the future and education is the master key. The predicament of Adeleke, Davido’s uncle, may have influenced the famous singer to enroll for the mandatory NYSC scheme after graduating.

Adeleke won the last major election in Osun state to become a senator, after the death of his brother. If Adeleke has maintained a good relationship with the population that gave him sympathy votes during his senatorial election, he would earn more votes than the other candidates in Osun-West senatorial district. Adeleke’s chance of winning would have fade off if he had not reconciled with Dr Akin Ogunbiyi, his main rival during the PDP governorship primary election. The outcome of the same primary saw Akinbade pulling out to pick ADC’s governorship ticket. For Adeleke to have a comfortable lead, he must convince some of the PDP defector’s supporters, in the camp of Akinbade and Omisore, to vote for the PDP.

APC’s Gboyega Oyetola have almost all it takes to win the election. He belongs to the ruling party in control of the other five states in the Southwest. He’s a brilliant administrator with vast knowledge of Osun politics, having run the state with governor Aregbesola for over seven years, as his chief-of-staff. Oyetola is a viable instrument of continuity and the electorates would thumb him, if they are satisfied with Aregbesola’s performance. Oyetola also have the federal might which can technically manage the election in his favor. In addition, Oyetola enjoys the backing of Bola Tinubu – the man whose raging political sagacity has installed governors and sacked then president Goodluck Jonathan. Despite all this election winning essentials, Oyetola may not win. His victory is being caged by controversies and intra-party conflict.

Oyetola’s emergence as governorship candidate nearly shattered the APC. The party chieftains had initially zoned the governorship ticket to Osun-West district, but later abandoned the arrangement to back Oyetola from the Osun-Central district that has governed the state for almost 12 years. Although Oyetola emerged through a direct primary process, other contenders believe his emergence was based on the overbearing influence of his cousin, Bola Tinubu. This triggered disaffections, protests and the exit of influential figures from the APC. The party lost Moshood Adeoti, the immediate past SSG and current candidate of the ADP.

APC also lost Senator Bayo Salami; eleven aggrieved members of the State Working Committee; the ex-Commissioner for Information and Strategy, Hon. Sunday Akere; and the ex-Commissioner for Finance, Budget and Economic Planning, Dr Wale Bolorunduro. Chairman of the Osun State Local Government Service Commission, Dr Peter Babalola also decamped. Other notable defectors are members of the state house of assembly representing Ede North, Iwo and Ilesa-West, which is the incumbent governor’s constituency. Ex-governor Oyinlola also defected from the APC to ADC before the primary. Politics is an all-inclusive sport. The exit of these persons and their supporters would have a significant damaging effect on Oyetola’s votes.

Such happened recently in Ekiti State. The ruling Ekiti PDP lost its heavyweights after Governor Fayose’s deputy, Kolapo Olushola, became the governorship candidate. Notables such as Prince Dayo Adeyeye and Senator Fatimah Raji-Rasaki decamped from the PDP to the APC. The ruling party later lost the election. APC’s Kayode Fayemi defeated PDP’s Kolapo Olushola with about 20,000 votes. Fayemi wouldn’t have got the winning votes if the PDP bigwigs didn’t decamp to the APC.

Another count against Oyetola is the populace perception that he’s another Lagos importee and Tinubu’s stooge, like Aregbesola. Some of the voters see thumbing Oyetola as licensing Tinubu to rule the state by proxy. APC’s victory partly depends on Oyetola’s ability to shred this notion. Efforts to convince the electorates might end up being unfruitful based on the recent happenings in Lagos. Tinubu’s obsessiveness, dictatorial tendencies, and alleged resistance to Governor Ambode’s reelection bid might make Osun people reject Oyetola, who is Tinubu’s cousin. Tinubu has many electable brains, far-reaching networks and large followers, but his take-it-all syndrome and godfather politics is making him lose the admiration of many. Nobody in Nigeria today, not even President Buhari, has made godfather politics obvious like Tinubu.

Aregbesola’s effort in the provision of infrastructure is commendable, but his inability to pay workers salary may deny Oyetola victory. Osun is a downright civil servants state and the non-payment of salaries, pensions and arrears has immensely affected the living standards of not just the civil servants alone, but the entire residents of the state. The working population may decide to deny APC their votes and that of their friends, families and associates. A similar situation made PDP lose the recent governorship election in Ekiti.

Based on this premise, a win for the APC in the Osun governorship election is a strong pointer that something was fundamentally wrong with the Ekiti election, maybe rigged. The difference between Ekiti and Osun is that between six and half-dozen. The states are in the same region and have people of similar orientation, culture and background. Their governorship elections also hold within the same period.

The pundit would have ticked APC’s Oyetola as the prospective governor-elect, but the recent happenings in nearby Ekiti, which is similar to what is currently happening in Osun, makes the pundit cast doubt on his emergence. The ADC, ADP and SDP flag-bearer are strong candidates, but their party structure is somewhat weak to win a governorship election, even though such has happened before. Olusegun Mimiko and Ibrahim Shekarau won governorship elections under the (seemingly weak) platform of the LP and ANPP in Ondo and Kano states. But things have changed terrifically. It is currently very unpromising that an individual would defect to a less popular party on the eve of a governorship election and win in Osun. Such defections apparently can’t earn the defectors a win, but can extremely damage the winning chances of the popular parties they defected from. All election winning indices considered, Ademola Adeleke’s (PDP) emergence as governor-elect is predicted.

Note: Foretelling an election outcome doesn’t mean the pundit have access to one sacred information or the election winning strategy of any candidate. Assessing the strengths and weaknesses of candidates to predict who’ll win is a common practice in developed nations. This doesn’t mean the pundits are compromising the electoral process or influencing the election results. Osun people have already decide who they’ll cast their votes for and nothing – not this piece – can easily change their minds. The pundit’s election prediction is made based on the expectation of a free, fair and credible election, not electoral fraud.

*Omoshola Deji is a political and public affairs analyst. He wrote in via moshdeji@yahoo.com

Spread the love The Edo State governor, Godwin Obaseki, has denied the rumour that he …