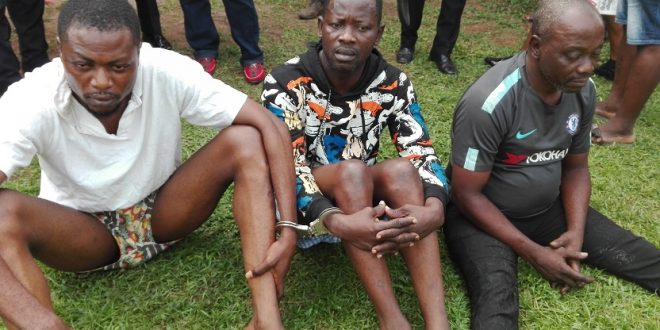 A former aide to Mr Adams Oshiomhole, the National Chairman of the All Progressives Congress, Mr Lucky Igbinovia, was on Monday arraigned and remanded in prison custody.

Igbinovia was remanded with two other suspects, Joel Otoghile and Kingsley Iyamu, for allegedly stripping a 24-year-old commercial sex worker, Favour Ada, naked and inserting pepper into her vagina.

Igbinovia, popularly known as One-Man-Squad, was a Special Assistant to Oshiomhole on community security and a top APC member.

He was remanded by Justice Joseph Acha of the Benin High Court (Criminal Division) till March 6, to decide on their final bail application.

The prosecution counsel, Mr Peter Ugwumba, in the case marked 117/2019, read out 14 counts against the accused persons.

They, however, pleaded not guilty.

The charges bordered on attempted murder, kidnapping, injury, trial by ordeal, false accusation, extortion, recording the act and transmitting it into video film which has since  gone viral on the internet, amongst other allegations.

Narrating her ordeals in the hands of her assaulters at the state police command headquarters in Benin, the victim, a native of Rivers State, told journalists that her worst moment was when they inserted pepper into her private parts, stripped her naked and videoed her.

She said she was taken to a native doctor who mysteriously implanted bullets into her stomach and later threatened her with a live snake, adding that in order not to die, she admitted to the crime and the bullets were later removed from her stomach.

She said when she saw that she was freed from the hands of the native doctor, she told her accusers that she did not steal their phone and that she only admitted to the crime because of fear.

She said when she maintained her innocence; they stripped her naked, inserted pepper into her private parts and severely beat her up.

Earlier during their parade by the police, the suspects spoke about their involvement in the incident.

They were alleged to have stripped their victim naked, beaten her up and inserted pepper into her private parts in the home of Igbinovia.

They also did a video of the whole incident and posted it on the social media.

Ada was said to have been accused of stealing an iPhone Xs-Max worth N440,000, belonging to Joel Igbinovia.

Speaking on his involvement, Joel said the victim and her female friend were invited to a hotel at Ugbiyoko, a suburb of Benin city, to entertain his friends.

“The girl was a prostitute. My younger cousin called her to the hotel and she came with another girl. I got up to pay my hotel bill on POS, but when I got back to my seat, my phone was no longer where I put it and the girls were gone. I asked why and I was told that the girls said the money we offered was too small.

“We searched everywhere but we couldn’t find the phone. We then went to another hotel where the girls had gone to and we met them there. I then pleaded with the girl (Ada) to return the phone to me because she would not be able to use it, being an iPhone, but she denied. It was then decided that we invite a voodoo man the following day to resolve the issue,” he said.

Joel further explained that the voodoo man instructed them to write their names on pieces of paper he gave them and squeeze the paper.

He said, “The man told us that the name of whoever stole the phone would disappear from his piece of paper. When we opened the pieces of paper, the girl’s name had disappeared. He repeated the process and the same thing occurred. Then, the voodoo man left us.”

The suspect added that the girl later confessed to them that she actually took the phone, but was under the influence of alcohol she took that day.

He, however, said that when the victim could not take them to where she kept the phone, his cousin began to beat her and inserted pepper into her private parts.

Charles Igbinidu is a Public Relations practitioner in Lagos, Nigeria
@https://twitter.com/ionigeria
Previous Tinubu ‘personifies everything that is wrong with the Nigerian system’ – Saraki
Next IT IS FINAL: Supreme Court shatters Tonye Cole, other APC candidates ambitions in Rivers State