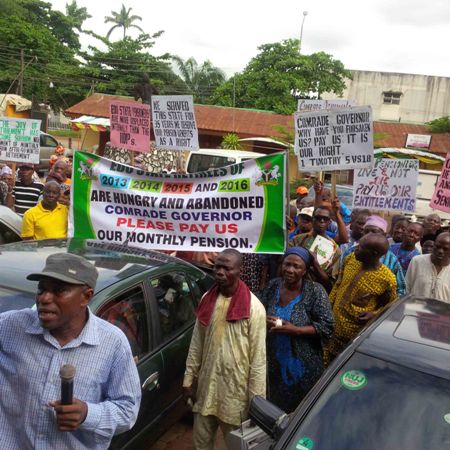 While Governor Adams Oshiomhole of Edo State is pre-occupied with ensuring that Mr. Godwin Obaseki succeed him in office, pensioners in the State are lamenting the inability of the governor to pay them their pension allowances ranging from 10 to 42 months.

Since the commencement of campaigns for the September 10 governorship election in the state, Oshiomhole has not hidden his desire to have Obaseki as a successor.

At different campaign venues, he has projected Obaseki as the only person who can continue the good work that he has started but the pensioners seem to be saying that they have not experienced any good work.

To demonstrate their pains and disaffection with the Edo State government on the issue, hundreds of pensioners on Monday defied the heavy rain and took to the streets of Benin, the Edo state capital, to protest non-payment of their pension arrears.

The News Agency of Nigeria (NAN) reports that the pensioners, armed with placards of various inscriptions, took their protests to the Secretariat of the Nigeria Union of Journalists (NUJ) in Benin.

A Spokesman of the pensioners, Mr Gabriel Osemwenkhai, told newsmen that the pensioners in the state had been experiencing hard times over the non-payment of their pension and gratuity by the government. He said that some pensioners had died as a result of hardship.

Osemwenkhai said pensioners involved comprised public servants, who retired in 2011 and owed by the state government. The spokesman alleged that the state government had refused to commence payment of the pension with effect from the date of retirement as stipulated in the Civil Service Pension Law. He said that the government’s refusal to adhere to pension laws had led to a backlog of arrears owed to pensioners in Edo.

He further stated that their problem was further compounded by the dissolution of the State Pension Board. “At the moment, public servants retiring after the dissolution of the Pension Board are again stranded due to government’s delay in processing their retirement papers; more than six months after their names have been removed from the payroll.

“Rather than creating avenue for retirees to process their pension papers, government has left this category of senior citizens in limbo”, he said.

The Chairman, NUJ, Edo Council, Mr Roland Osakue, said the union shared the pains and challenges of pensioners. He appealed to the pensioners to remain peaceful in their protest, promising that members of the NUJ would use their various media outfits to let the authority know their plight.