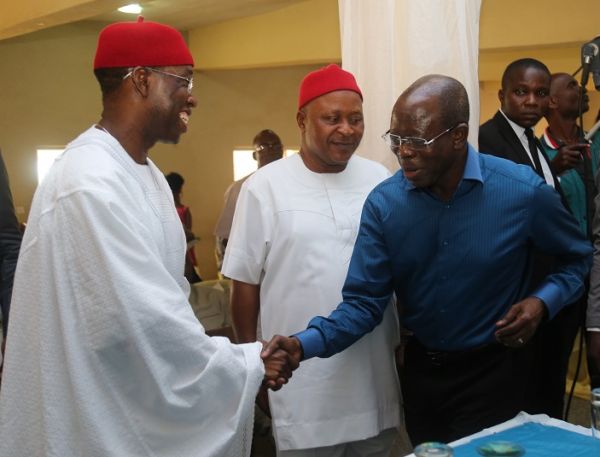 Speaking through his  Information And Orientation Commissioner, Prince Kassim Afegbua, Oshiomhole said ”it has come to our knowledge that following the commencement of the Continuous Voters Registration exercise in Edo state preparatory to the September 10 gubernatorial election in the state, the Peoples’ Democratic Party in connivance with the Delta state Government, has started recruiting thugs and hooligans from Delta State to register as voters in communities sharing border with Edo state.

We had earlier taken the information with levity when we received it a few days ago, but we now have it on good authority that indeed the PDP Governor of Delta state, His Excellency, Senator Ifeanyi Okowa is involved in this sinister move to send political thugs to the fringe villages between the two states to fraudulently register as eligible voters with the intention to use them to cause untold mayhem before and during the elections, on September 10th.

According to information at our disposal, forty political thugs have been dispatched to each of these border villages with the sole aim of registering them as voters before engaging their services to perpetrate violence during the September 10 election.

We wish to place the security agencies on notice of this untoward intention of the Delta State Government with their Edo PDP collaborators to cause a breach of security in Edo state.

The fact that our people are generally known to be peace-loving should not be misconstrued as a sign of weakness, it is just to make the point that we believe wholesomely that democracy is a game of contestation of ideas and not one of contestation with guns and bullets.

We have put our people on notice to keep an eagle eye on their environment and resist any infiltration or attempt to undermine the peace and security of the state.”