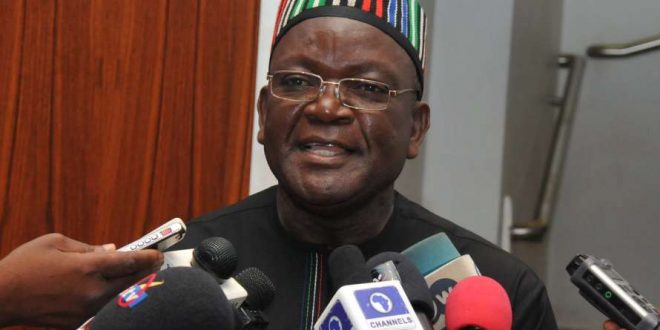 Governor Samuel Ortom of Benue State has denied media reports that he has parted ways with his Rivers State counterpart, Nyesom Wike, over the crisis rocking the Peoples’ Democratic Party (PDP).

Wike and his team are insisting on the resignation of the PDP national chairman, Dr. Iyorchia Ayu, over their perceived grievances on the outcome of the party’s presidential election which led to the emergence of Alhaji Atiku Abubakar.

Some kinsmen of Ayu had lampooned Ortom for taking sides with the Rivers governor against his Benue brother (Ayu).

But in a swift reaction, Ortom denied the alleged split with Wike reported in some sections of the media.

While addressing newsmen in Makurdi, the state capital, shortly after a meeting with the Jemgbagh people of Zone B senatorial district on Tuesday, Ortom said it was necessary to clear his stand on the issue rocking his party at the national level.

He said, “In Benue State, we do not have any problem, from bottom to top we are good to go as far as our party is concerned. The BoT members were here some few days ago and we deliberated on the matter they sought my opinion first to know what my thinking was about the crisis. I told them that truth as far as I am concerned; and they took it with passion and also asked me for recommendations which I gave. That was it all. That was done and I hoped that they will do justice to it so that our party will take over power in 2023.

“But, the headline that I have split with Nyesom; I just came back from London with Wike this morning (Tuesday). We are friends and I still maintain my stand on what I said. I have not moved away from there, that I still sympathise with Wike on the injustice meted on him. Politics is about interest and where your interest is not protected, you have a right to protest and I think that is what is happening. The party leadership has not been fair to Governor Wike based on activities that took place during and after the convention.

“We have not been able to deploy adequately the internal conflict mechanism to resolve those issue and this is all I have been saying. I sympathise with him and still stand with him that the leadership of the party at the national level should do the same thing. In politics nothing can be late, no matter how difficult it may seem that if everybody bring down himself to the level to getting others who are aggrieved. And to say that some of us are not happy with the injustice that have been meted, we remain committed to PDP and I feel that the right thing should be done to put us together.”

Charles Igbinidu is a Public Relations practitioner in Lagos, Nigeria
@https://twitter.com/ionigeria
Previous DSS Arrests Soldier ‘Supplying Guns To Kidnappers’ In Abuja
Next Ex-Aide to Ogun State Governor to serve 5 years in the US for unemployment fraud, scams